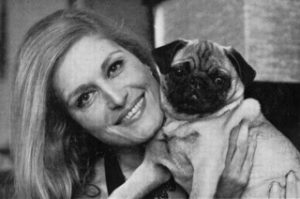 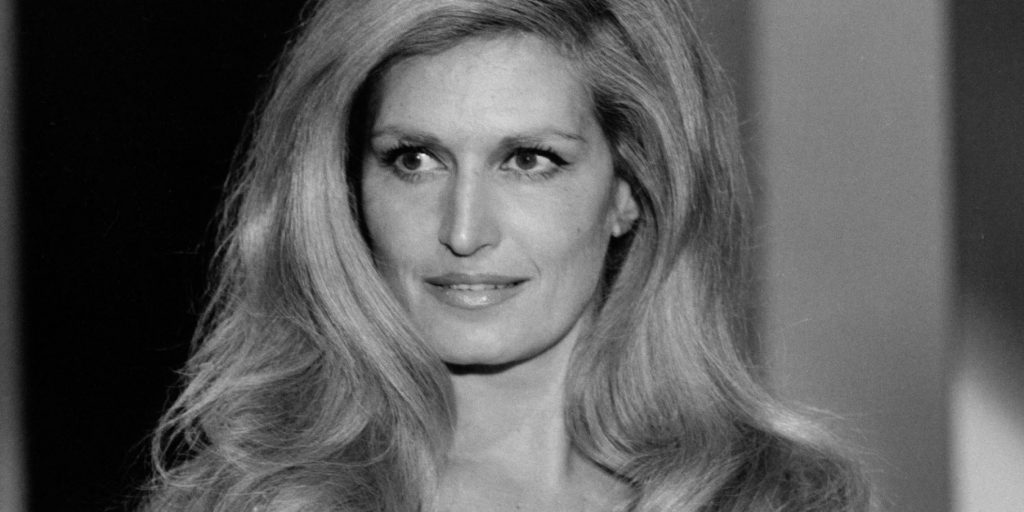 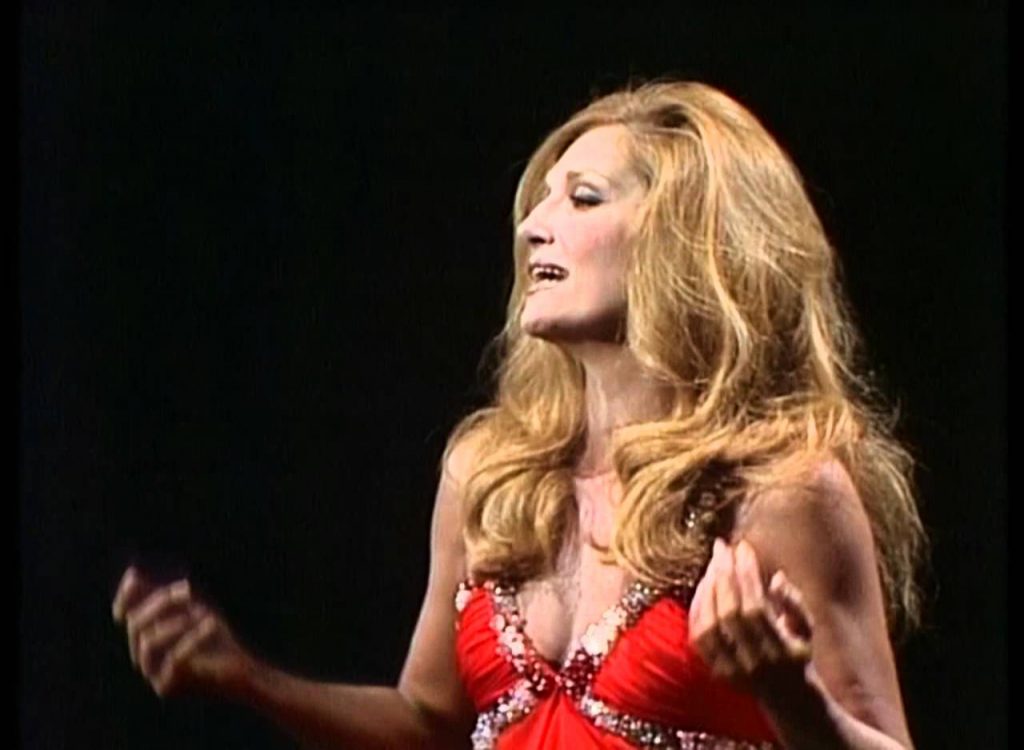 Dalida was a famous singer from the 60s to the 80s and an icon. Still now. Her success was huge and Dalida has had and still has great great fans in France (and also abroad). One of the main squares in Montmartre has been named after her.  For many, Dalida is a myth, a legend, a diva. She received more than 70 gold records. She sold more than 170 million albums worldwide. However her private life has often been tragic. 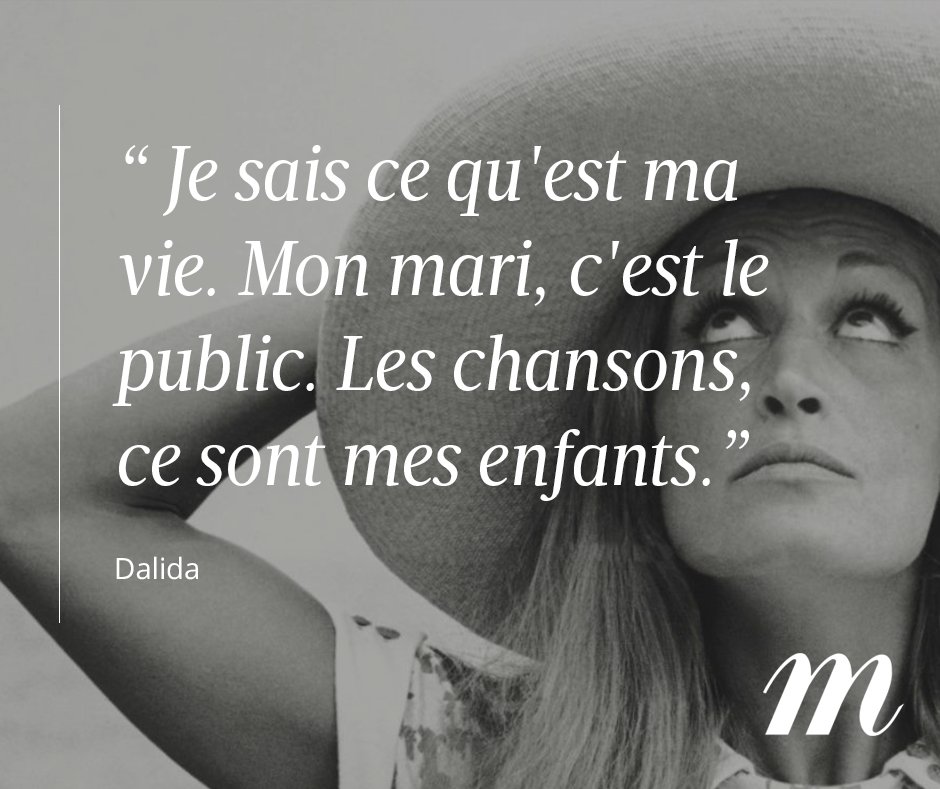 “I know what my life is. My husband it’s my public. The songs are my children”

Galliera Palace devotes a major exhibition to Dalida to mark the 30th anniversary of her death. Her wardrobe is exposed at the Palais from  April 27 to August 13  2017. Dalida loved fashion from Christain Dior, Chanel, Yves Saint Laurent, Lacroix, Azzaro and many more. She was sophisticated, glamourous. 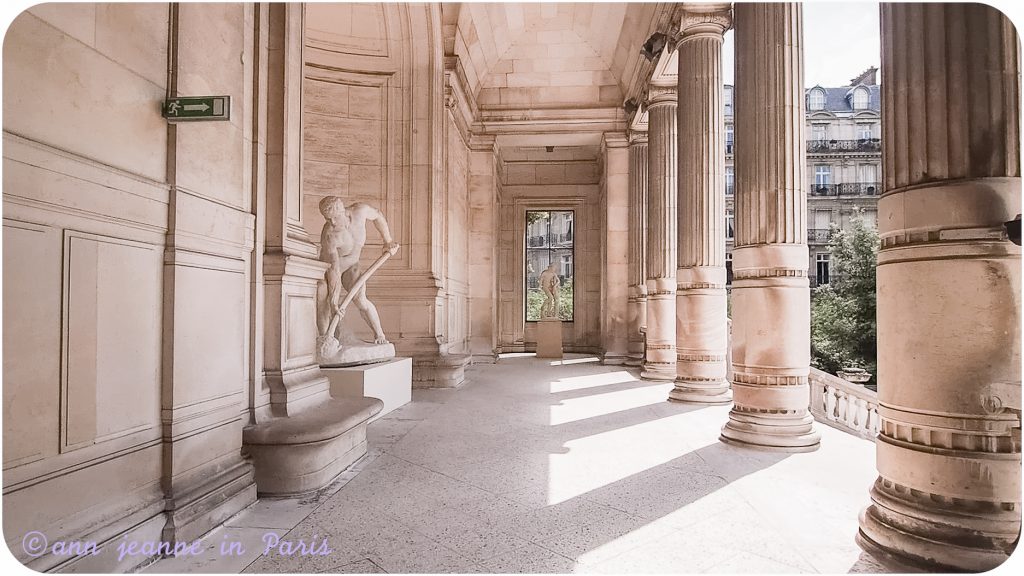 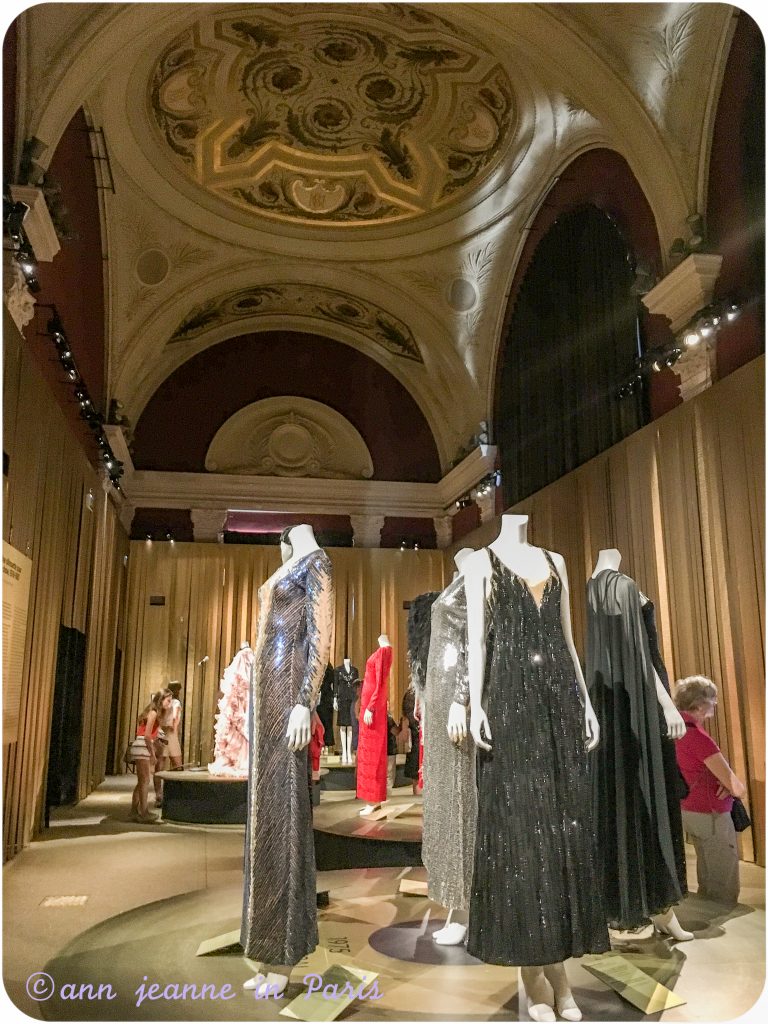 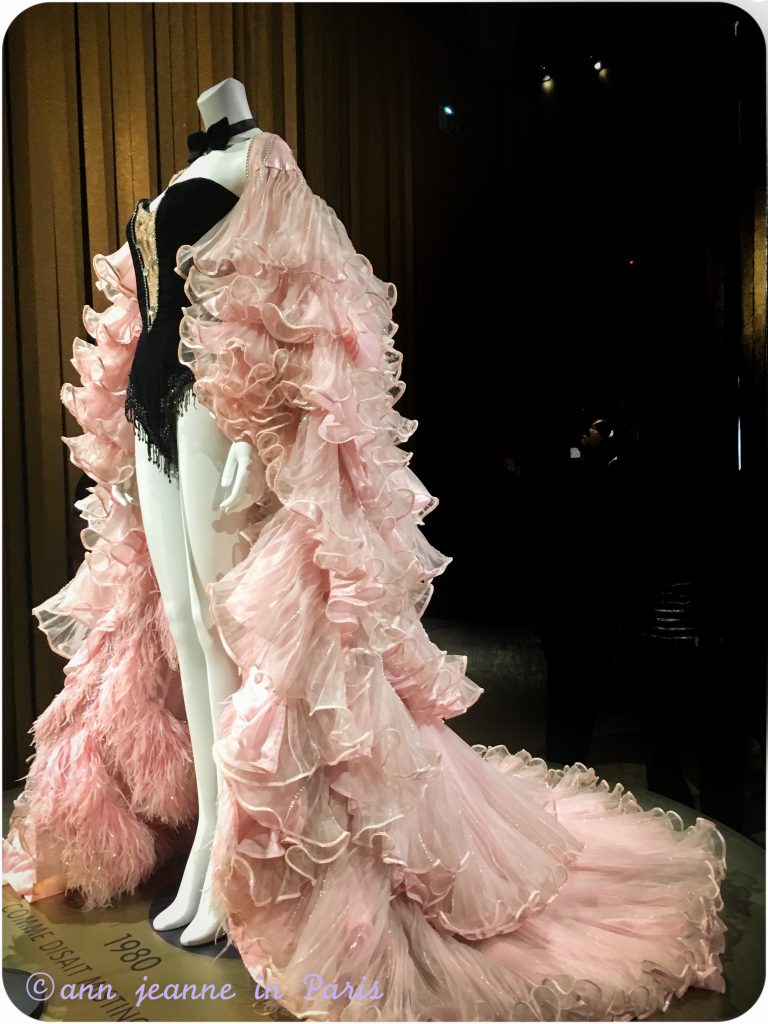 MY VIDEO OF DALIDA EXHIBITION AT GALLIERA : Please watch this video of the exhibition in Galliera (a video by Ann Jeanne in Paris) : 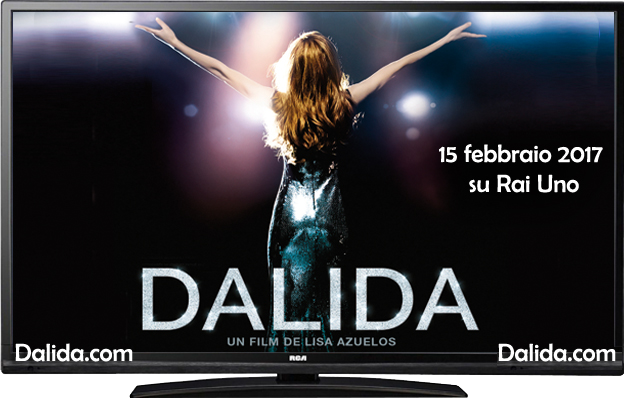 Below, a video about the film

Dalida has been living for 25 years in Montmartre, 11 bis rue d’Orchampt – from 1962 to 1987.She bought a townhouse in the 1900 style in Montmartre at the beginning of the 80s, nearby the Sacré Coeur. It has always be a quiet refuge for Dalida for the rest of her life. 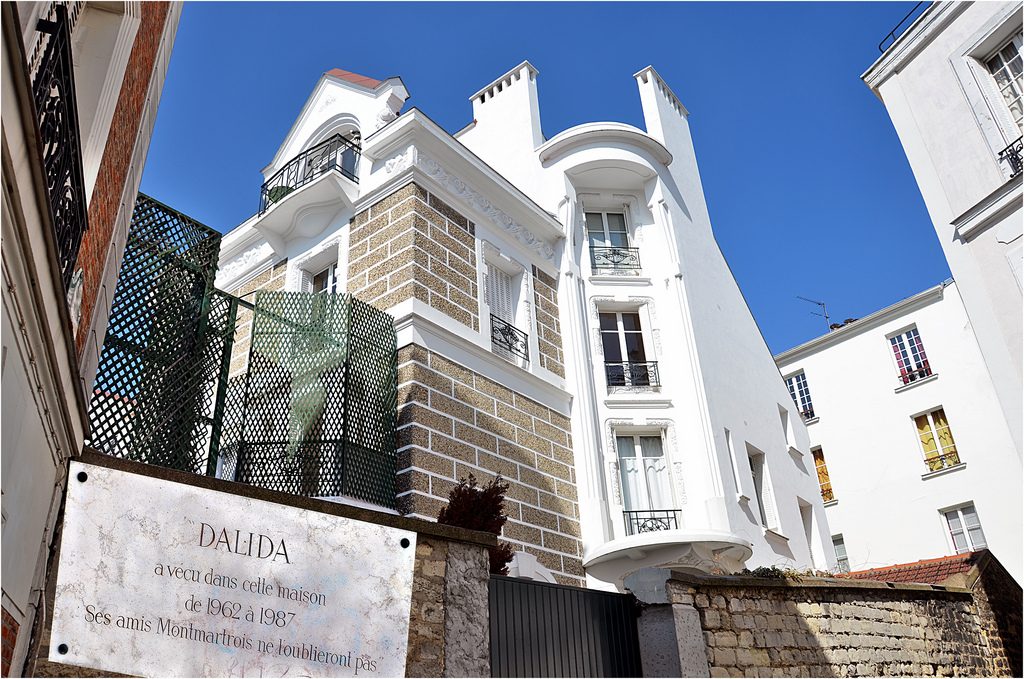 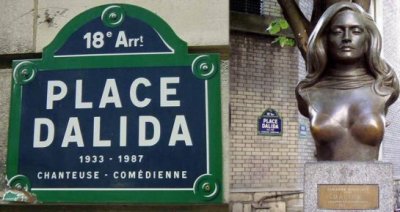 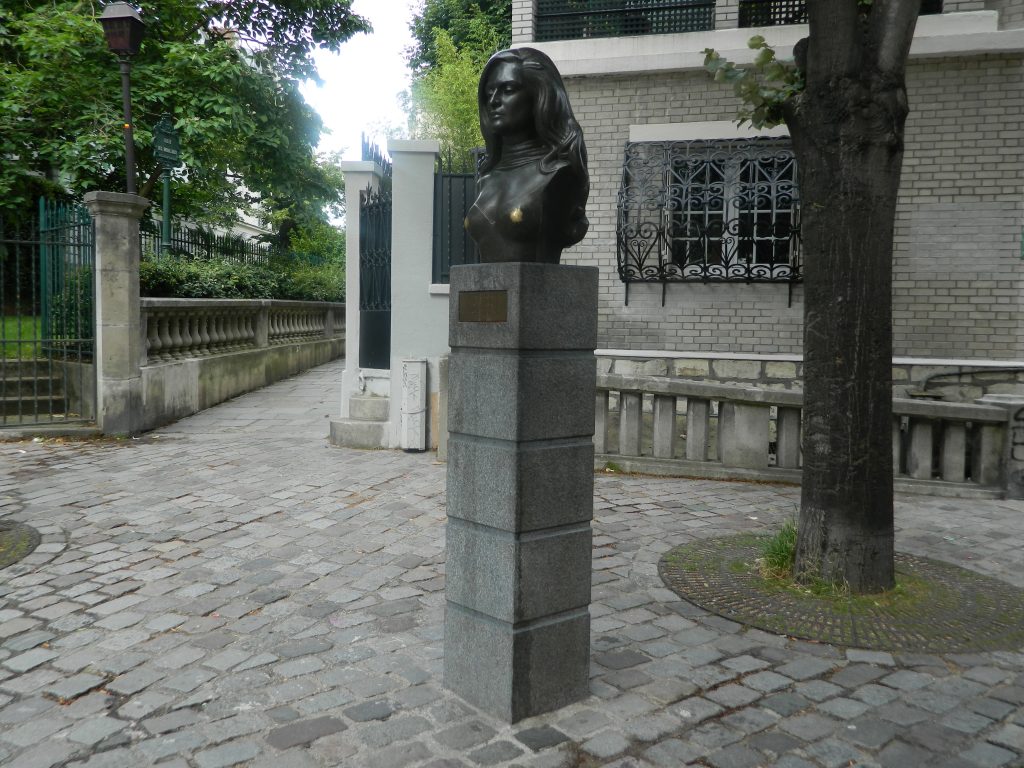 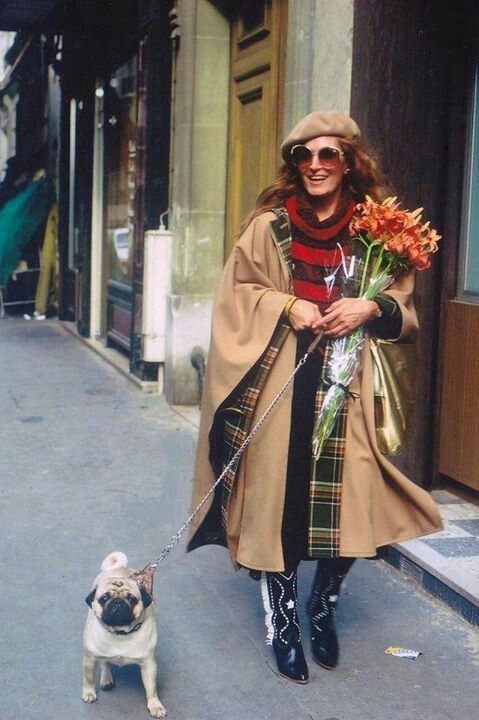 Dalida in Montmartre, nearby her home

Dalida rests near her home in the upper part of the cemetery of Montmartre with the trees she loved. 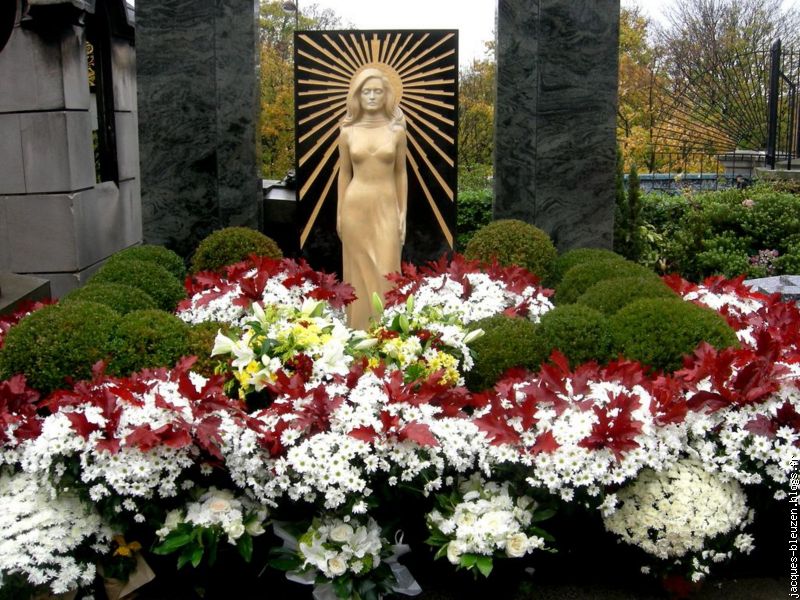 A few WORDS about DALIDA’s STORY 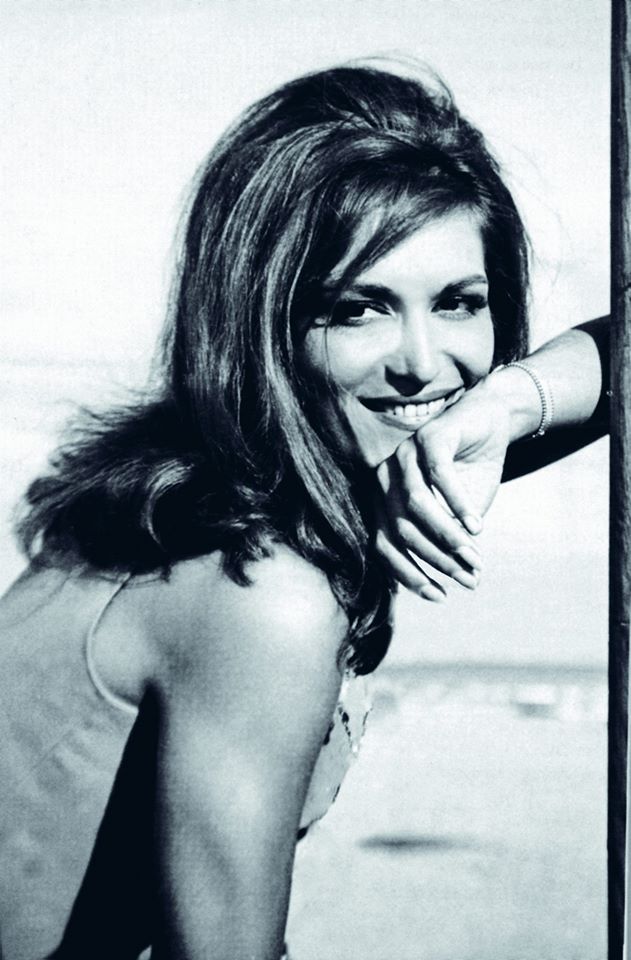 Dalida was born Yolanda Gigliotti on the 17th of January 1933 in Cairo suburbs in a bourgeois emigrant family. Her italian grand- parents had emigrated to Egypt in the beginning of the 20th century.

She had 2 brothers, Orlando (her elder brother) and Bruno and she grew up in a musical environment : her father was  first violonist for the Cairo Opera. Dalida’s mother tongue was Italian. But she learned Egyptian Arabic and French in Cairo. She had a happy childhood, though serious eye problems affected her from an early age and had to undergo several operations. 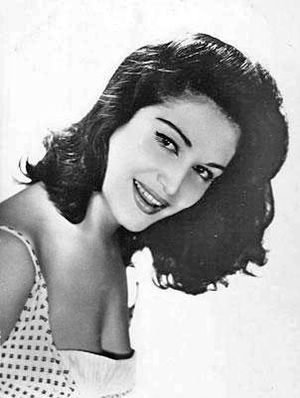 She was destined by her family for a career as a secretary, but Dalida dreamed of becoming and actress. She was fascinated by Hollywood world . In 1951 she secretly entered a local beauty contest. In 1954, Yolanda entered another beauty contest, “Miss Egypt contest” and she was crowned Miss Egypt at the age of 19. Then, she started working as a model, then as an actress in Cairo. Then she began to dream of launching a career in Paris. 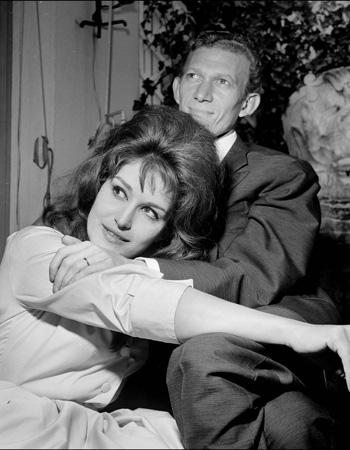 With Lucien Morisse, her first husband

In 1954, she started a new life in Paris where she became Dalida. She started taking singing lessons with a music teacher and after a few months her teacher sent her off to audition for a cabaret on the Champs Elysées where she worked during several months.

She then was invited by the owner of Olympia (one of the most famous Parisian music-Hall) onto a show. Her performance impressed two influential men in the French record industry, Lucien Morisse and Eddy Barclay. Lucien Morisse became Dalida ‘s manager, then her husband (A difficult relationship : Lucien Morisse was married but finally divorced . They got married in Paris in 1961). 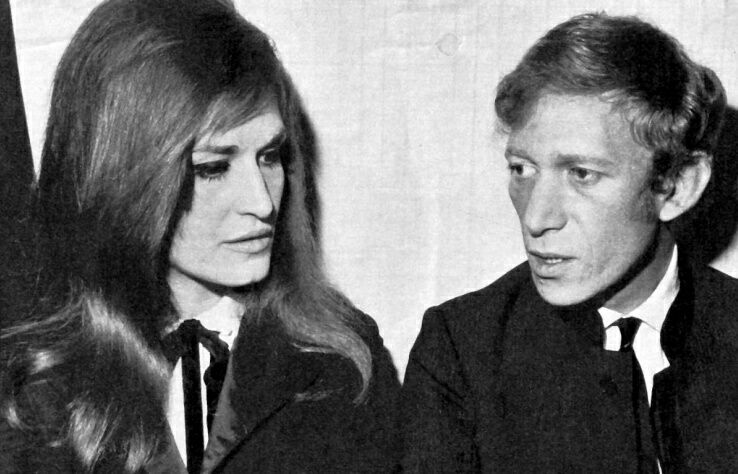 Dalida and Lucien Morisse, her first husband and her manager

Her second single, “Bambino” really launched Dalida to fame. Bambino was played practically non-stop on one of the most renown French radio (Europe 1) and reached the top of the French charts. She then performed at the Olympia beside Charles Aznavour.  In 1957, she received her first gold disc. Bambino had sold over 300 000 copies

Her second very successful hit was “Gondolier” (in 1957). She then started a great tour. In 1959, she went on another tour in Italy. Her fame soon spread throughout the rest of Europe. In 1961, she performed for an entire month at the prestigious Olympia music-hall attracting over 2000 music fans each night. She then carried out with a tour which took her to Hong Kong and Vietnam (where she was already a huge star)

Her  younger brother, Bruno (known as Orlando) became her manager. And her cousin Rosy became her secretary. 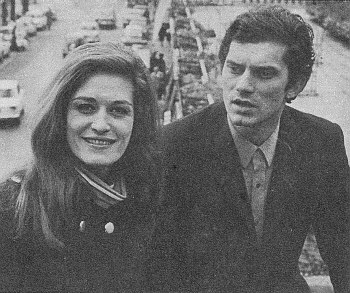 In 1966, she was introduced to a young talented songwriter. They fell passionately in love. They soon got married. Dalida decided that Luigi should appear with her on stage in Italy during a song contest and that they would each perform their own version of the song “Ciao Amore Ciao”. Dalida was already a huge star in Italy while Luigi Tenco was not known yet. Neither Dalida nor Luigi were awarded a prize. Luigi Tenco then retired to his hotel room and committed suicide in his room. Dalida was devastated at Luigi’s death and a few months later she  attempted to end her life.

Below : Dalida singing with Luigi Tenco in 1967 at San Remo (Italy)

In the late 60’s, after Luigi Tenco’s death, Dalida reinvented herself : she started to read a lot : philosophy, psychology and started to practice yoga and meditation. She often went to India then went into analysis. But she also carried on singing and went on a serie of concerts in France, in Italy, then all over the world

In 1970, her huge hit was “Darla dirladada”. Then with the song “Avec le temps”,  she totally changed her repertoire with very meaningful poetic lyrics. She performed at the Olympia for 3 weeks where she was greeted very successfully 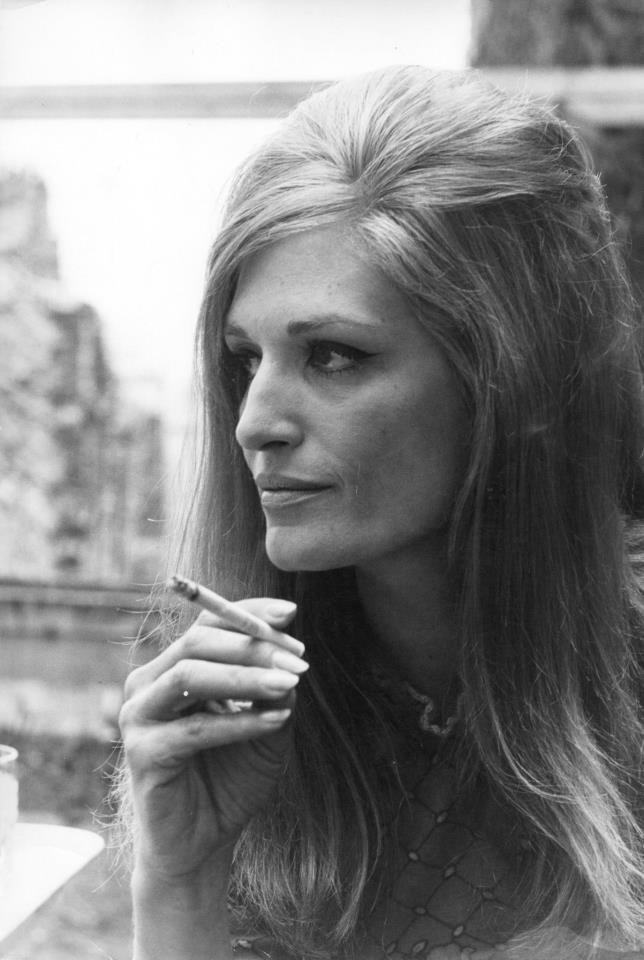 In 1972, she recorded “Paroles Paroles” with her old friend Alain Delon It reached the top of the French charts and was n°1 in Japan. 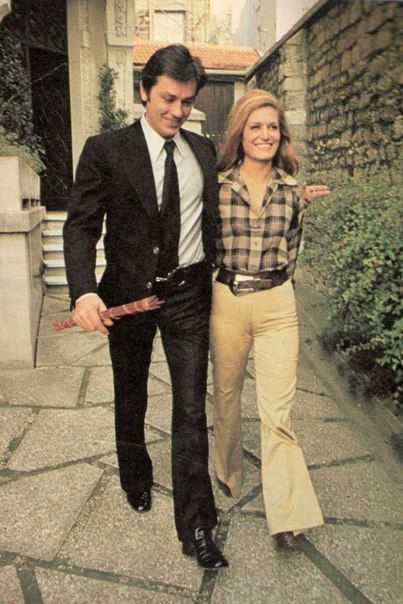 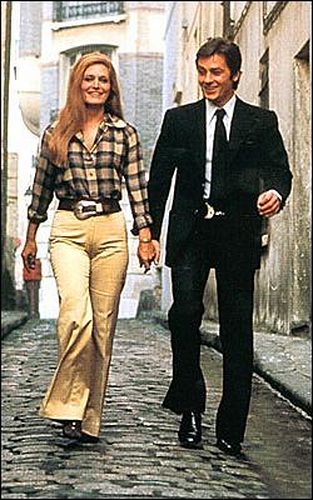 HER LOVE STORY WITH RICHARD CHANFRAY

Her encounter with Richard Chanfray in 1972  (who wanted to be known as the Count of Saint Germain) changed her life.  And she appeared to be a glamourous star. It has been her longest love story (9 years) 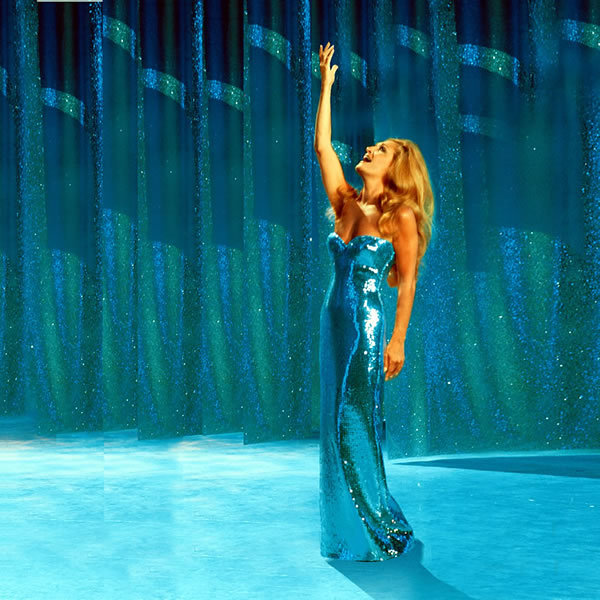 In 1974 : “Gigi L’Amoroso” which became among the most famous hit of Dalida, n°1 in 12 countries. Then she went on tours in Japan,  Quebec, then Germany . In 1975, she was awarded the prestigious Prix de l’Académie du Disque français”. Then another huge success “J’attendrai”. She was performing very frequently on French TV and she returned several times to Egypt.

She recorded  the traditional Egyptian song Salma Ya Salama which was released in France and the Middle East. She recorded this song in 7 languages.  It was a phenomenal success. 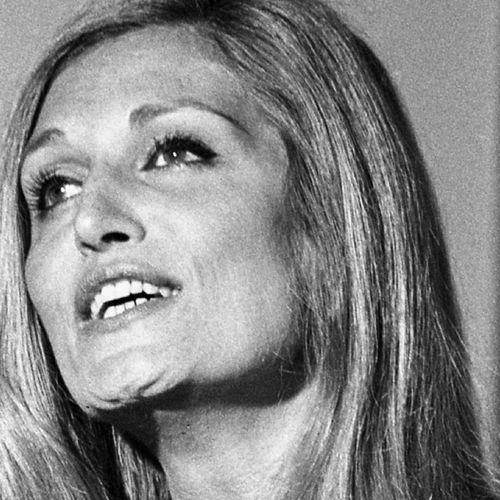 She recorded “Generation 78”, a medley very influenced by the 70’s disco wave. She has been adapting her musical style to the latest trends. In 1979, She recorded “Monday Tuesday” 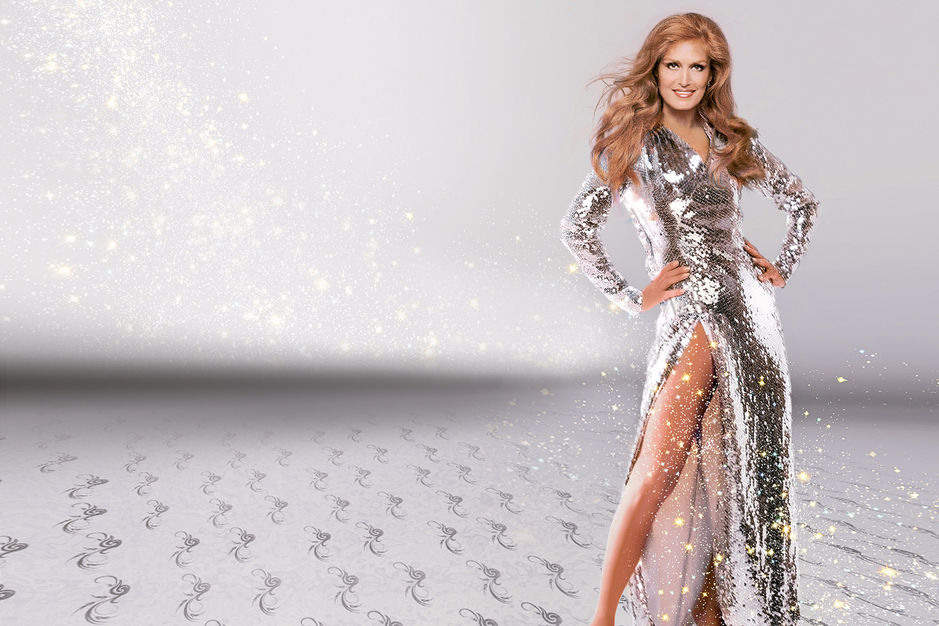 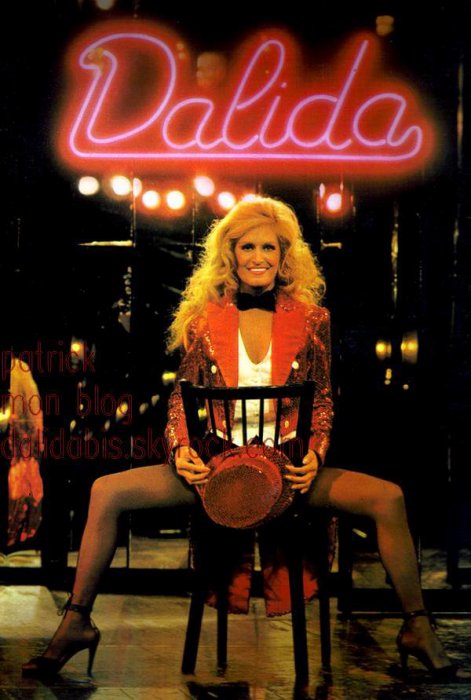 Dalida transformed her appearance. She danced sourrounded by dancers. In 1980, he performed a spectacular Broadway-style show in Paris at the Palais des Sports with Lester Wilson as her choreographer, (L. Wilson was the choreographer of John Travolta in Saturday night fever)r.   She sold out at the Palais des Sports for 18 gigantic shows with 30 musicians and 12 dancers. She was the first woman to perform in front of 5000 people in Paris. She then went on a national tour which lasted 10 months. 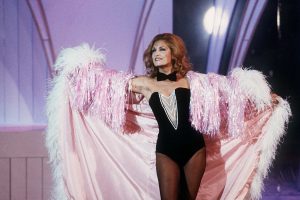 Dalida at the Palais des Sports in 1980

In 1981 she split from Richard Chanfray.

On her premiere at the Olympia where she performed in 1981, she received a diamond disc for having sold over 80 million albums over her career.

Below : “Monday, tuesday”, a great hit

She then set off on another world tour for 12 months. When back to France, she recorded “Mourir sur scène”. Her popularity was as great as ever. In 1983, two years after they split up, she learnt that the former lover Richard Chanfray had committed suicide. Devastated … In 1984, she set off on tour again, The following years, she was force to interrupt her career to undergo 2 major eye operations. In 1986, She play a leading role in the film “Le Sixième jour” (director : Youssef Chahine) 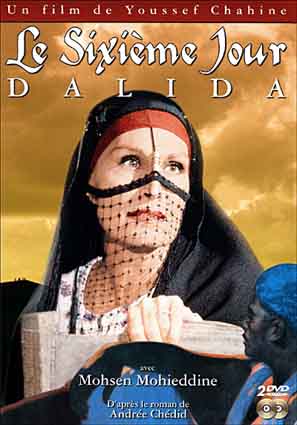 In 1987, she decided to put an end to her life and let a message :  “Forgive me life has become unbearable for me…”

SONGS (Some of her most famous songs) :

Paris through the eyes of a native

Get a real connection with Paris
“Ann Jeanne in Paris” tours are different from  traditional guided tours. They are private walking tours with you only,or you and the person you choose.  No lectures : it’s an encounter, a meeting, a cross-cultural experience. The tours are friendly, welcoming and we walk at your pace. I give you all my attention, I accompany you, I discuss with you and share my Paris with you.