Would you enjoy discovering a real Medieval gem located in the Latin Quarter, and even having a meal in the only Cistercian building in Paris… ?

…and it’s open to the public ! 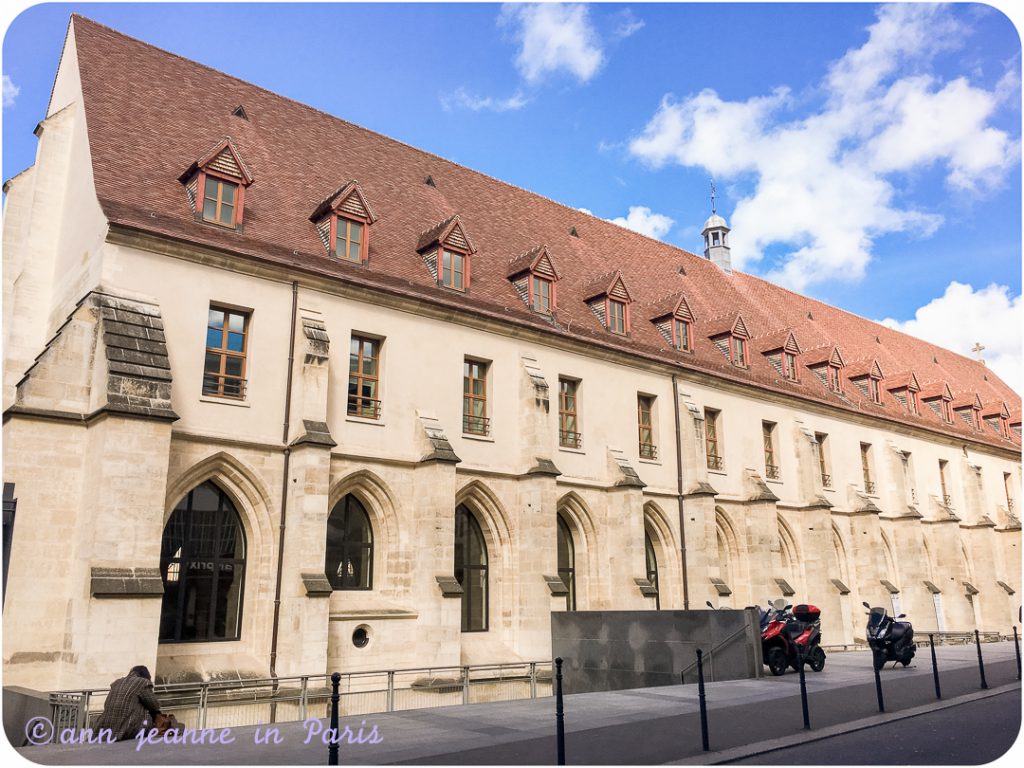 The only Cistercian building in Paris. One of the great buildings of Medieval Paris which dates from the 13th century. In June 2010, the College des Bernardins received the Prize for Cultural Heritage of the European Union competition called Europa Rostra in the category “Conservation.

Some History : From the 13th century to our day 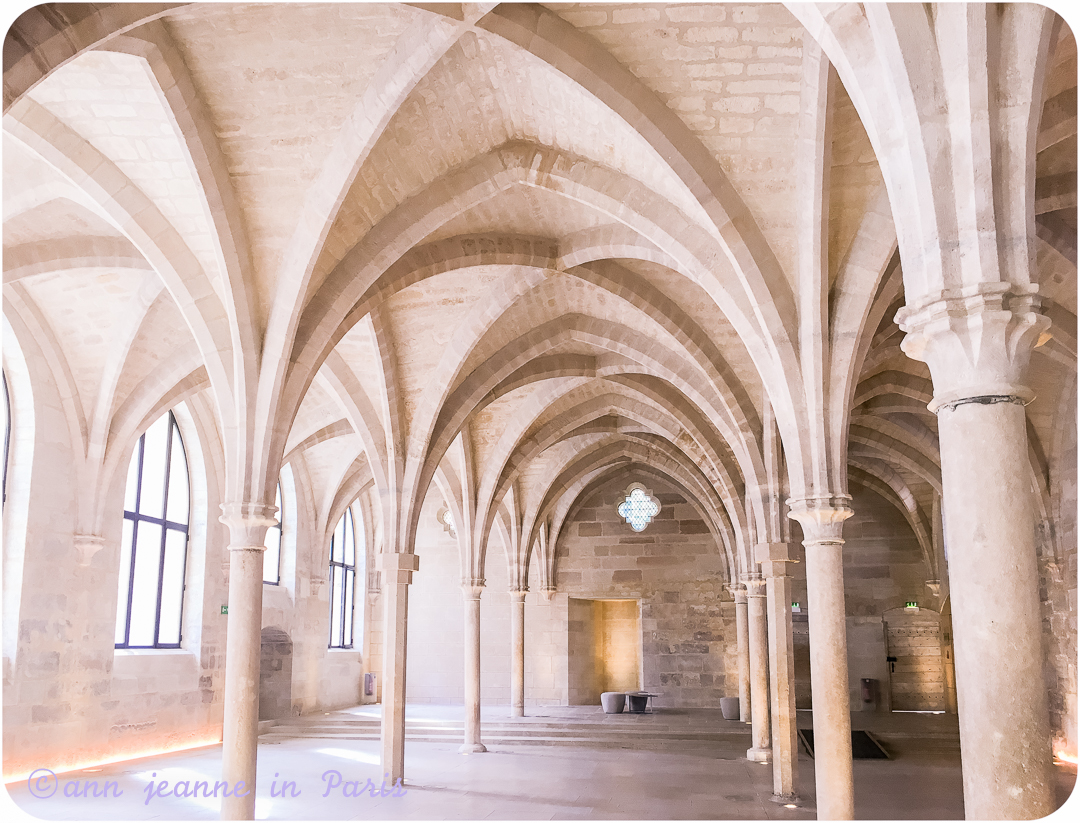 In the first half of the 13th century, it’s the birth of the University of Paris . Pope Innocent IV encouraged the Cirstercians to go to Paris and study theology, philosophy, literature and to transmit their knowledge to their fellow brothers

An English monk, Etienne de Lexington, created in 1245,  the Collège des Bernardins. it was a place for study and research. In 1248, half a century after the creation of the University of Paris, the construction of the College des Bernardins began, financed through Christian philanthropy and influenced by the architectural model of Cistercian abbeys. 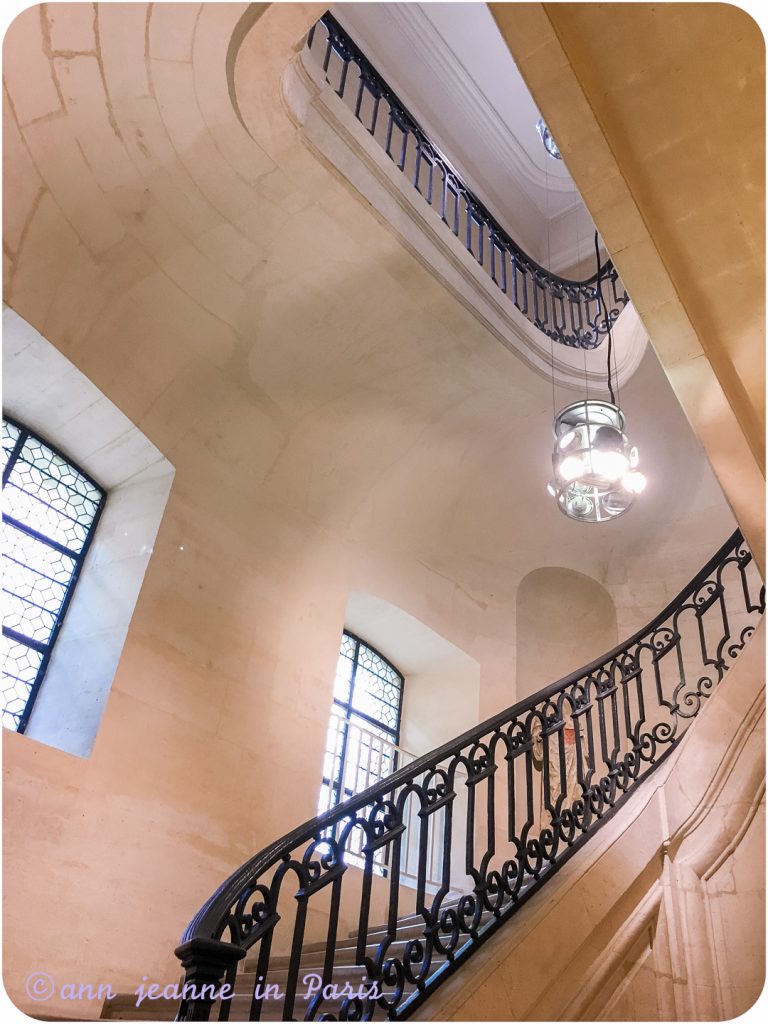 During more than 4 centuries, the Collège des Bernardins welcomed, educated and  accommodated hundreds of monks and young intellectuals and contributed to the intellectual development of the city and the University of Paris.

In 1338, an imposing church was constructed. But it was never completed.  The church was partly destroyed by the creation of the rue de Pontoise in 1810 and then by the opening of the Boulevard Saint Germain in 1859. Only the sacristy remained up to nowadays.

At the time of the French Revolution, the Collège des Berrnardins became state property. It became in turn a prison, a warehouse, then a fire station and then a fire station between 1845 and 1995. Finally, until its last renovation, it was a residential school for the Police Academy

It was only in 2001 that the Parisian Diocese brought back the Collège des Bernardins , from the City of Paris, in order to offer to the city a  cultural project in the service of mankind and the future.It turned it into a place of dialogue, culture and contemplation.

Today, it still continues its thought and research purpose. The Collège is a place of sharing and openness dedicated to mankind and the future.  : numerous meetings and cultural exhibits, contemporary art exhibitions, concerts, performances, debates…. 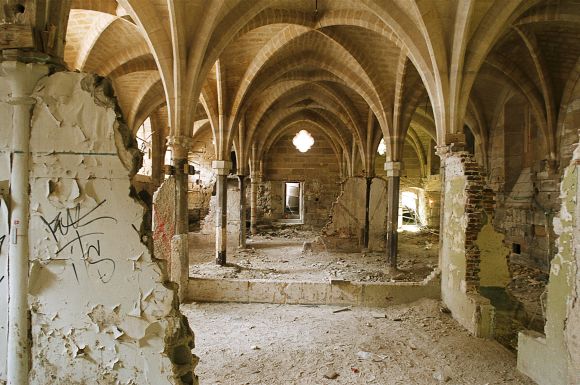 The restoration began in 2004 and completed in 2008. Since September 2006, then College des Bernardins has been open to the general public for the first time in its history.

A statue of Christ which dates back to the 14th century, overlooks this space. 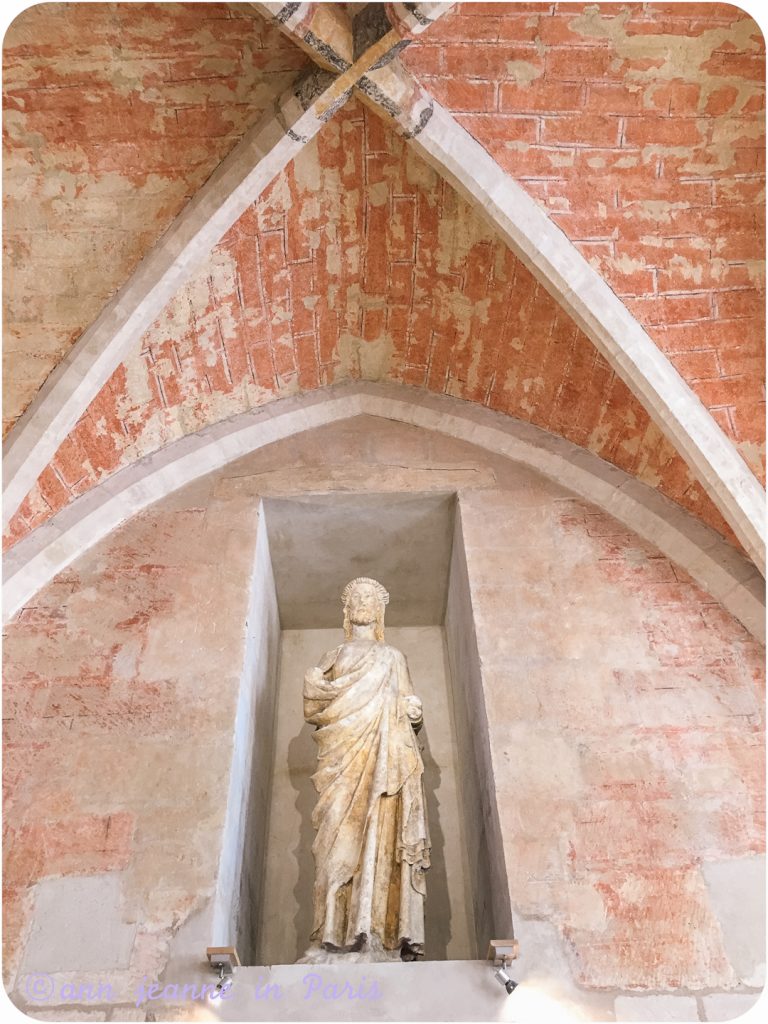 It’s a very large space exceptional for its sobriety and refinement. 70 meters long, 14 m meters wide and 6 meters high.  It was built according to Cistercian architecture.   When the monks were living in the College, it hosted the classrooms, the refectory and the kitchen.

A video of a concert in the College des Bernardins :

It was built during the 14th century. It once connected the Church of the Bernardins to the monks’ building.  A Gothic architecture but still the sobriety of the Cisterstian architecture.

A garden : A small garden that you can visit 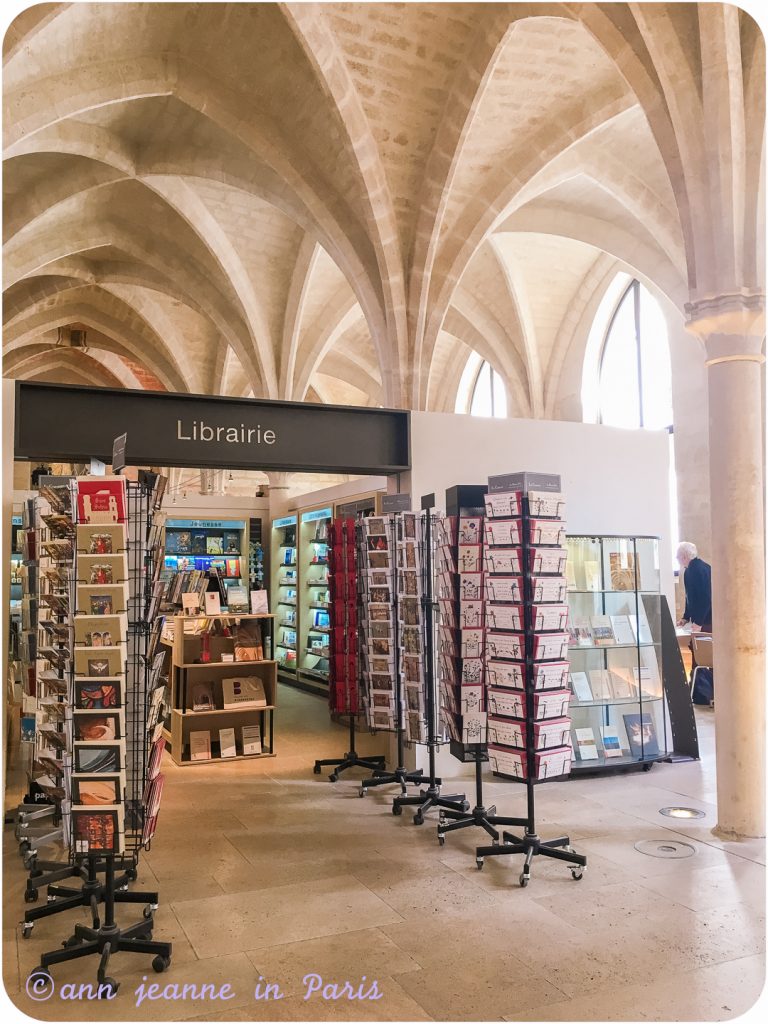 … and even a restaurant !! The Table of the Bernardins cafe”

Yes, you’ll find a restaurant called “The Table of the Bernardins café”. How amazing to have a lunch in such a wonderful Medieval setting ! 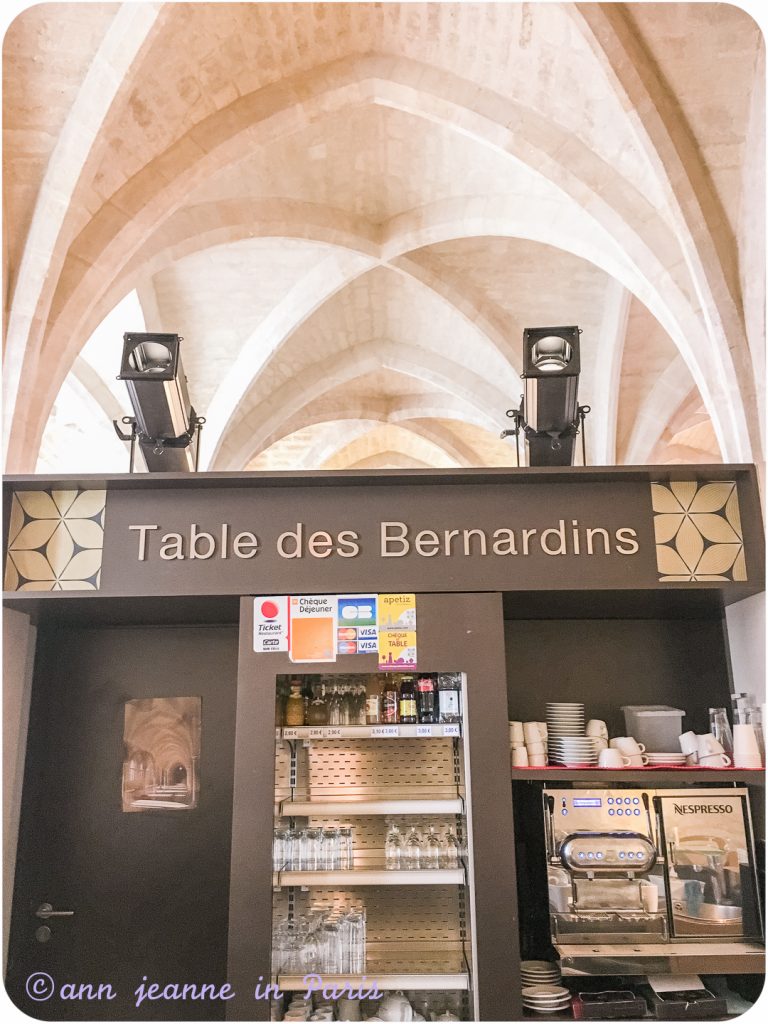 It’s an amazing place to have a meal : 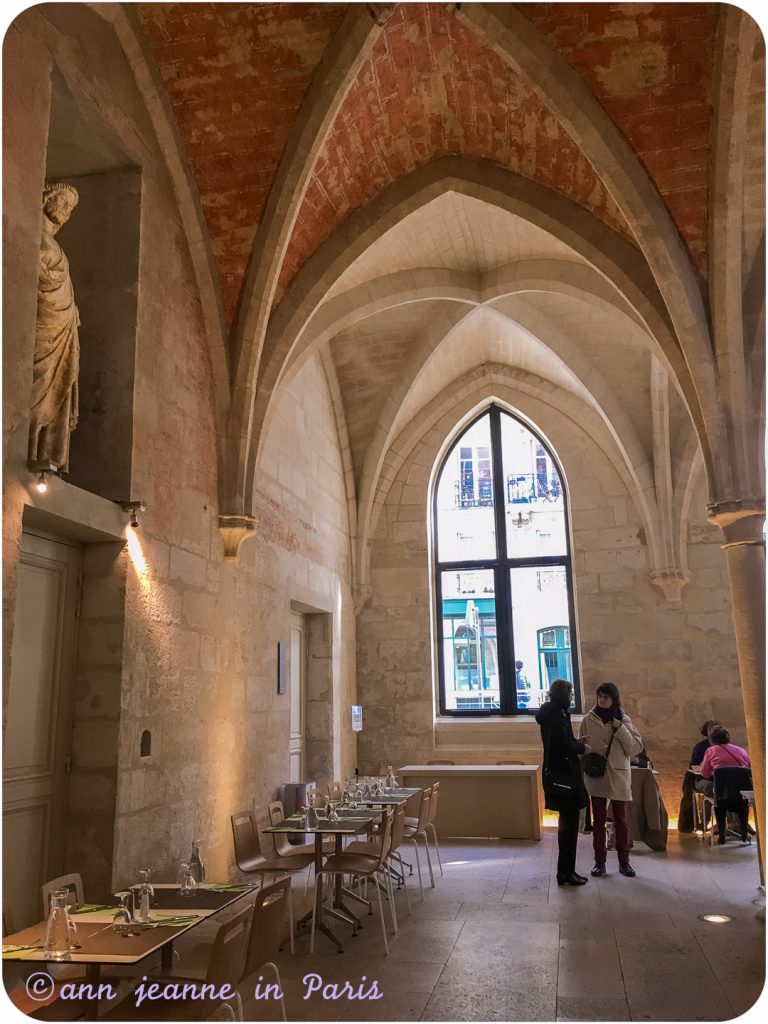 You don’t have to make a reservation, just come (unless you’re a group of several people) 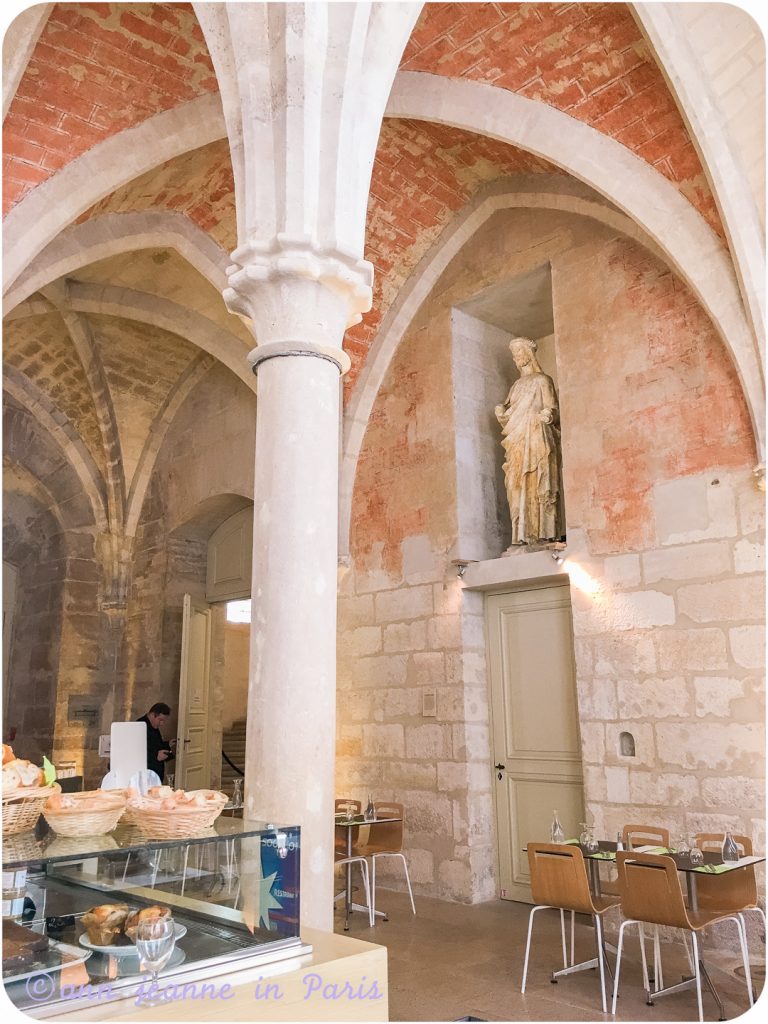 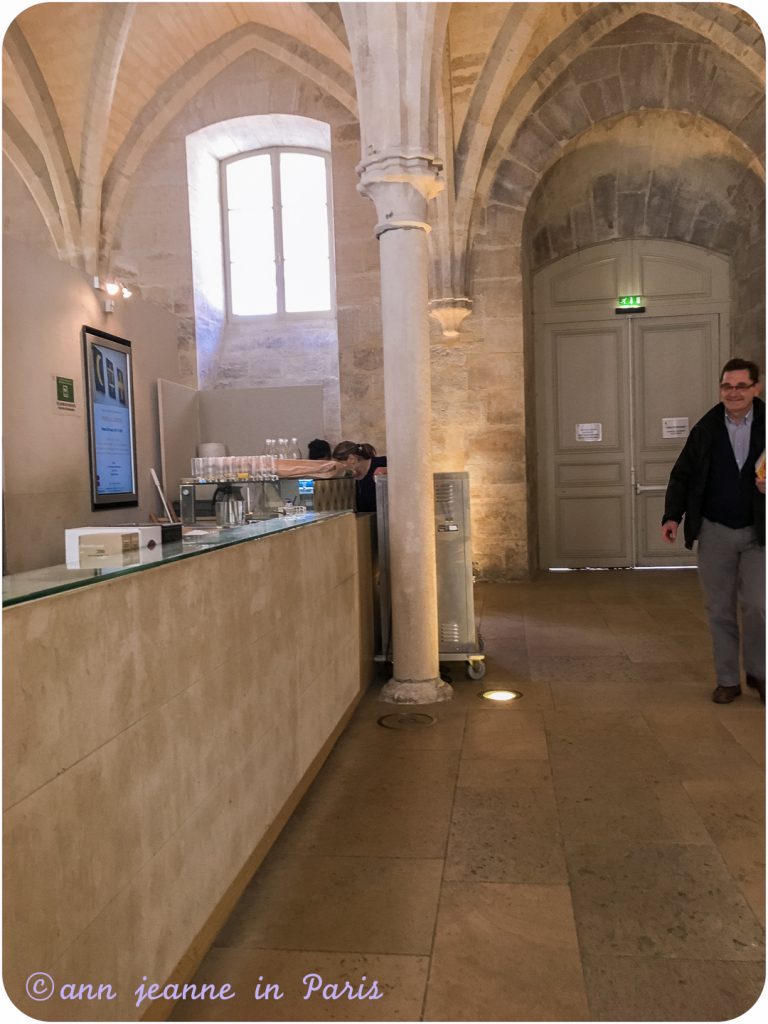 A large one : It’s located under the great medieval roof. The oak beams date  from 1150 and a large 18th century bay window. It welcomes conferences, concerts, forums, films…

A small one : It’s used as a classroom and conférence hall. It features a 13the century Cistercian rose window 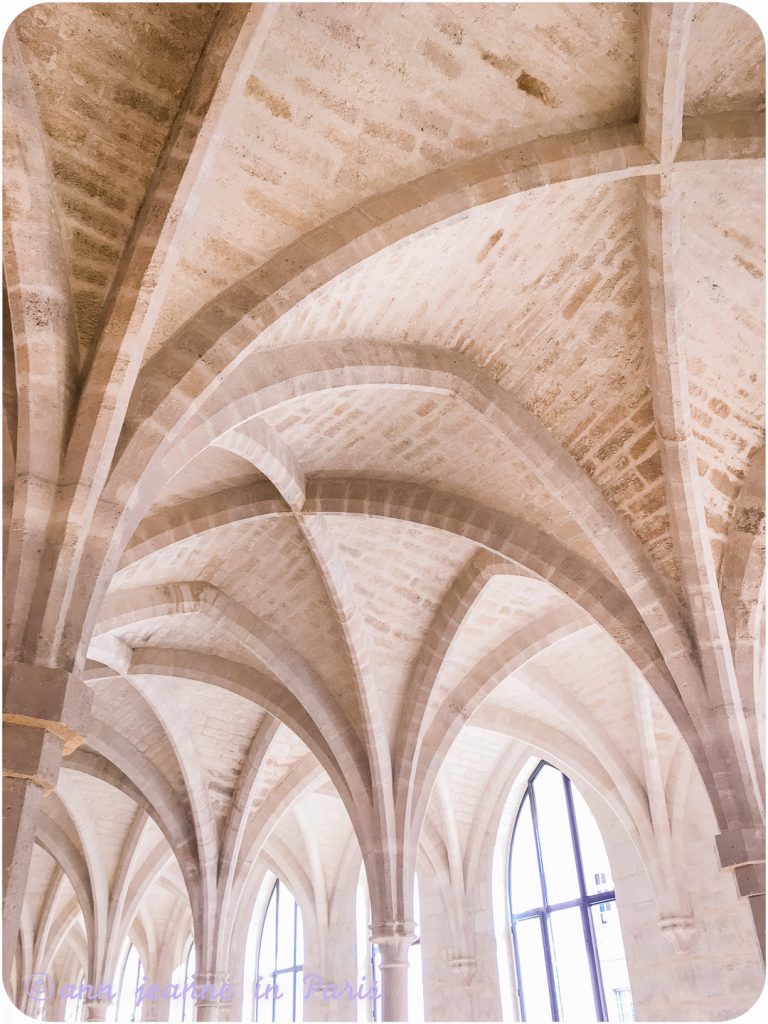 A Medieval cellar : (open to visitors during guided tours) It was initially a storeroom. It contains vestiges that reveal the original construction.  Inside a the 12th century wall which was built to change then course of the river Bievre. . It’s now entirely restored and houses a library, classrooms and meeting rooms. 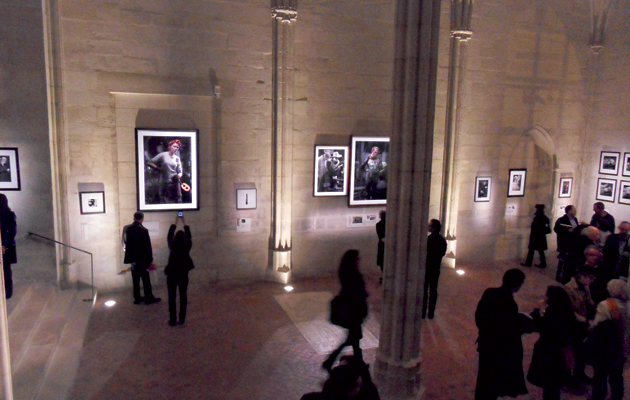 Ann Jeanne in Paris is very different from a tour operator. My private walking tours have nothing to see with a traditional guided tour.  Only you,  or you and the person with you.

It’s much more a meeting, a cross cultural experience. Because I was born raised and have been studying and then working in Paris, because it’s my hometown, I’ll be delighted to show you my Paris, and make you experience Paris through my eyes.

I’ll welcome you, I’ll give you all my attention, will give you tips to make  the most of your stay in Paris. I’ll walk at you pace and can personalize the tour according to your wishes and preferences.

The tours ? :  the Latin quarter off the beaten path part north or south), Montmartre village off the beaten Path,  the markets, Faubourg Saint Antoine and its courtyards, Daguerre Montsouris …

« Marie Curie, the most famous female scientist of all time
Le Louvre »