Marie Curie, the most famous female scientist of all time

The most famous female scientist of all time

Marie Curie was a French-Polish physicist, chemist: pioneer in radioactivity.

She spent most of her live in France.

“Not only did she do outstanding work in her lifetime, and not only did she help humanity greatly by her work, but she invested all her work with the highest moral quality. All of this she accomplished with great strength, objectivity, and judgment. It is very rare to find all of these qualities in one individual.” ALBERT EINSTEIN Theoretical Physicist 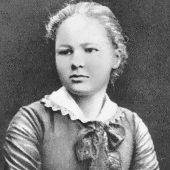 French citizen, but she never lost her sense of Polish identity

She excelled at school, was a top student in her secondary school, but couldn’t attend the men-only University of Warsaw. She instead continued her education in Warsaw’”floating university’, a set of underground informal classes held in secret.

Later, she was naturalized French . While a French citizen, she never lost her sense of Polish identity. She taught her daughters the Polish language and took them on visits to Poland. She named the first chemical element that she discovered “Polonium” after her native country. 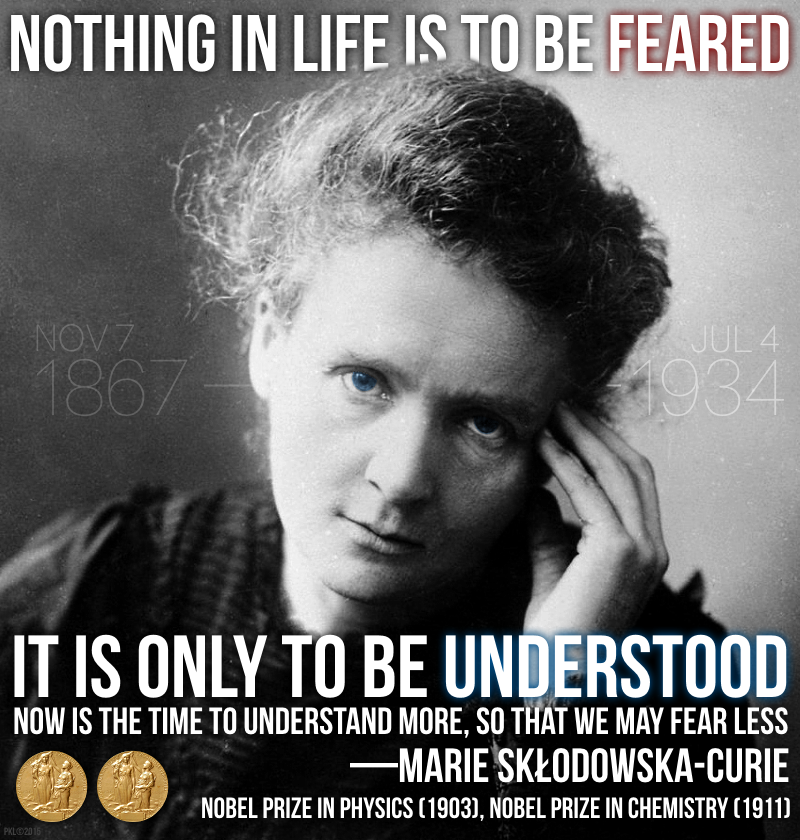 Both Curie and her sister Bronislawa were  interested in scientific research and dreamed of going abroad to earn an official degree,

In 1891, at the age of 24, she finally made her way to Paris followed her older sister, Bronislawa to study in Paris. She enrolled at the Sorbonne.  The course was, of course, taught in French, which Marie had to reach top speed in very quickly.

She had only a little money and  this was a time of some hardship for the young scientist. She didn’t have much to eat and during Winters, she had to study in her unheated apartment, chilled to the bone.

She completed her master’s degree in physics in 1893 at the Sorbonne. She finished as top student in her master’s physics degree course.  Then she earned another degree in mathematics the following year in 1894, aged 27.

Pierre and Marie Curie : She married Pierre Curie, her colleague in the field of 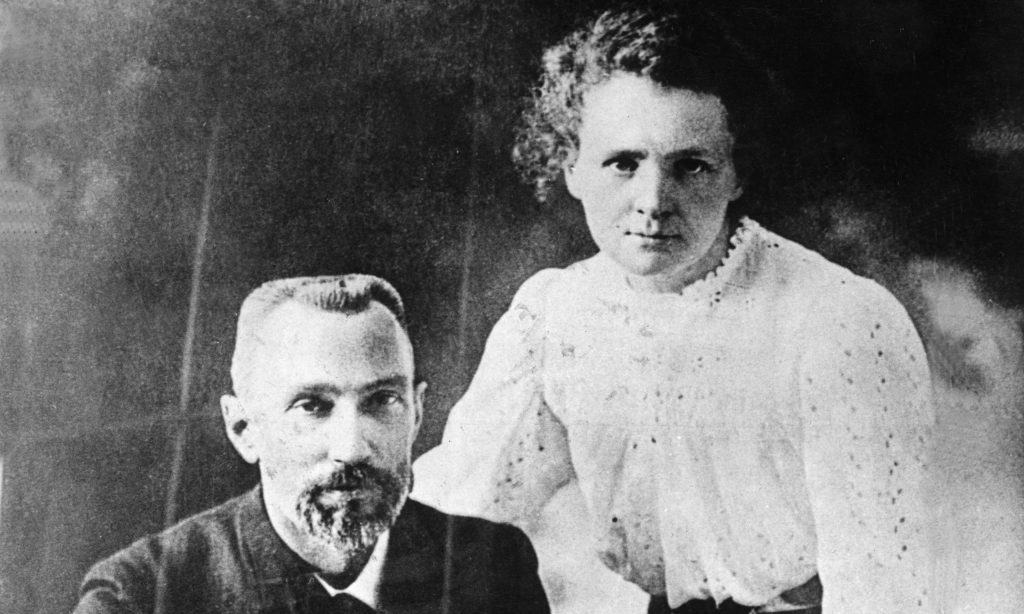 After her degrees in Physics and Mathematics, she received a commission to do a study on different types of steel and their magnetic properties. She needed a lab to work in and a colleague introduced her to French physicist Pierre Curie. A romance developed between the brilliant pair and they became a scientific dynamic duo. They married on July 26 1895 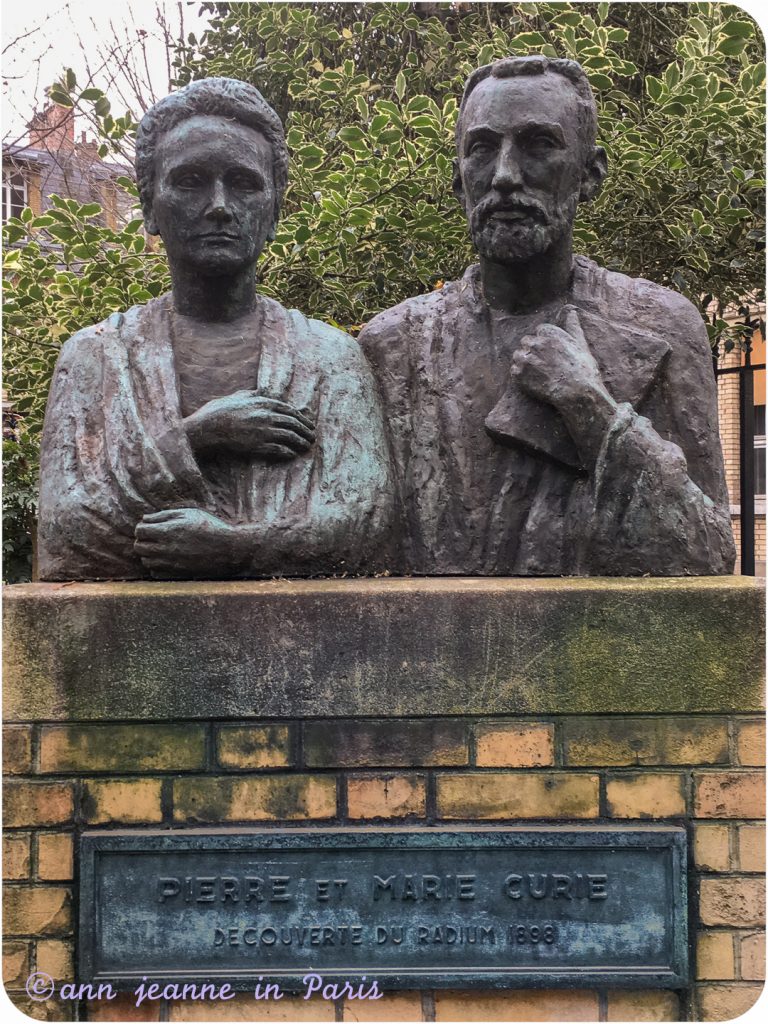 Statue of Pierre and Marie Curie, located in Marie Curie’s garden, nearby the laboratory where she has been working after Pierre Curie’s death

They worked together and discovered two new chemical elements: radium and polonium

“My husband and I were so closely united by our affection and our common work that we passed nearly all of our time together.”

The Curies worked together investigating radioactivity. They were completely devoted to one another.

They were jointly awarded Nobel Prize in Physics for research on radiation in 1903. They shared the prize with Henri Becquerel, the original discovery of radioactivity. 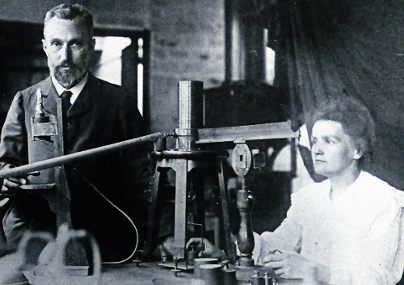 Then, they developed an international reputation for their scientific efforts and they used their prize money to continue their research.

Pierre Curie’s life was cut short in 1906 when he was knocked down and killed by a carriage.

Despite her tremendous grief, Marie took over his teaching post, becoming the first woman to teach at the Sorbonne. She continued the work that they had begun together. 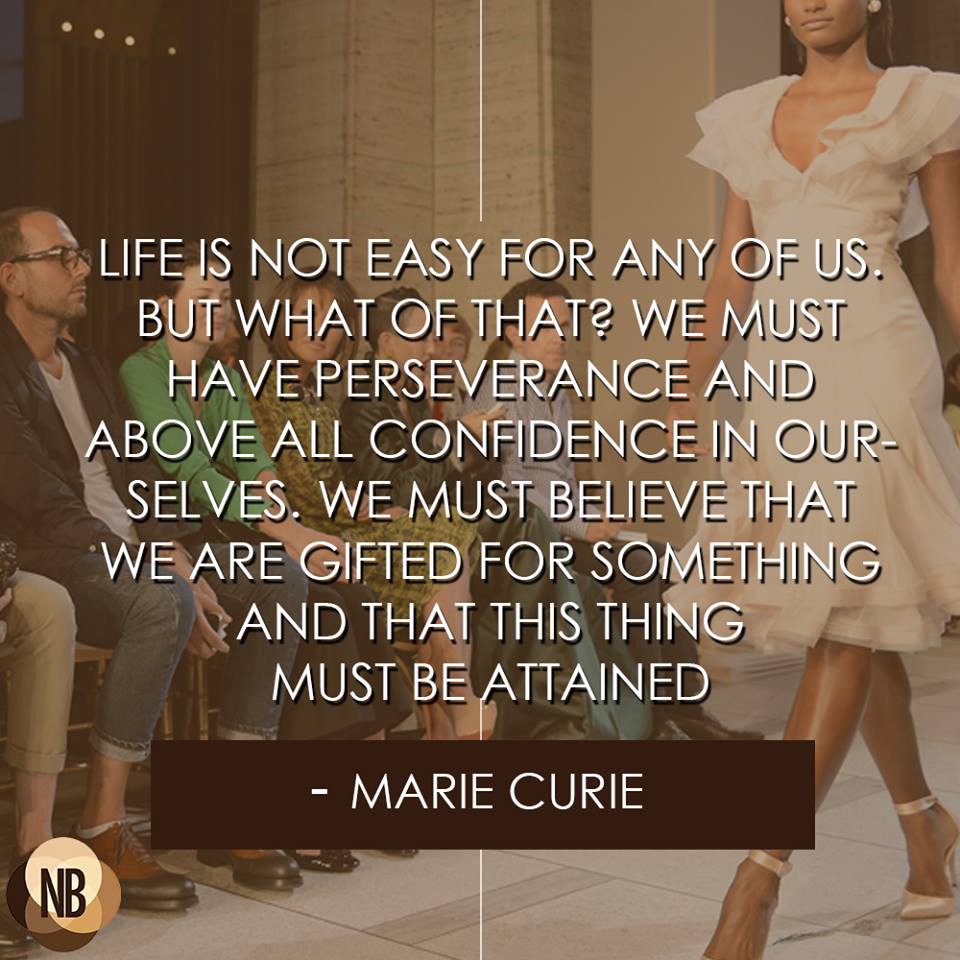 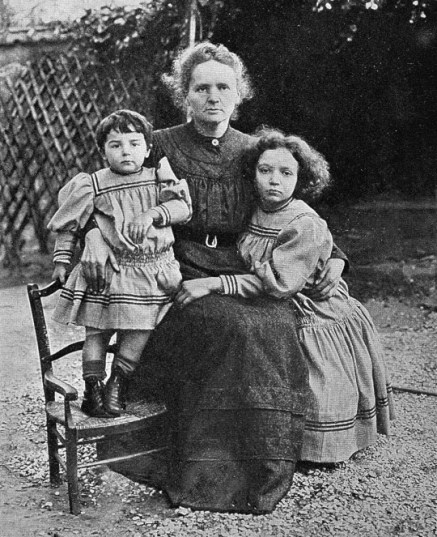 Marie Curie’s research was crucial in the development of x-rays in surgery.

During the WWI, Curie helped to equip ambulances with x)ray equipment, She herself drove the ambulances to the front lines.

The use of the X-Rays during the war saved the lives of many wounded men.

Despite her success Marie continued to face great opposition for male scientists in France, and she never received significant financial benefits from her work.

On the photo : Portrait of Marie Curie and her daughters, Irene and Eve, 1908 – Credit: Wellcome Library,

A lasting contribution to the world 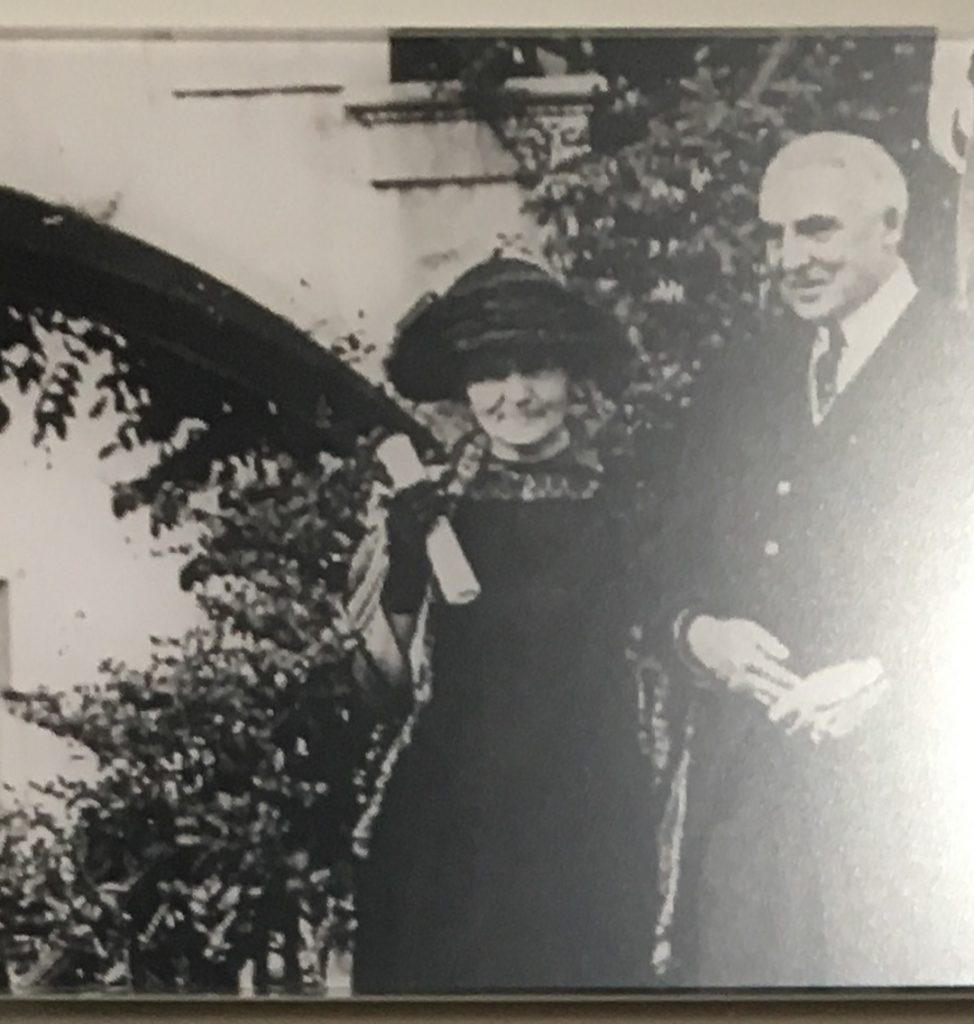 “She not only conquered great secrets of science but the hearts of the people the world over.”NEW YORK TIMES, JULY 5, 1934

She travelled to the United states twice, in 1921 and in 1929 to raise funds to buy radium and to establish a radium research institute in Warsaw.

In May 1921, Marie Curie, accompanied by her two daughters Irène and Eve, to the United Sates where she was received in triumph. For 6 weeks, she gave lectures,n visited universities and colleges for women… On the 20th of May, the President G. Harding officially gave Marie Curie one gram of radium. The price of this precious radioactive material : 100 000 dollars… ( it had been collected by a national fundraising campaign). The gram of radium was used for the research at the Curie Laboratory and to treat patients at the curie Foundation. On the photo : Marie Curie with the American President, Mr Harding at the head of the procession descending the stairs of the  White House after the ceremony on 20 May 1921.

Below : a leaden mahogany given to Marie Curie by the American President in May 1921 with the replicas to the 10 tubes that contained the gram of radium. 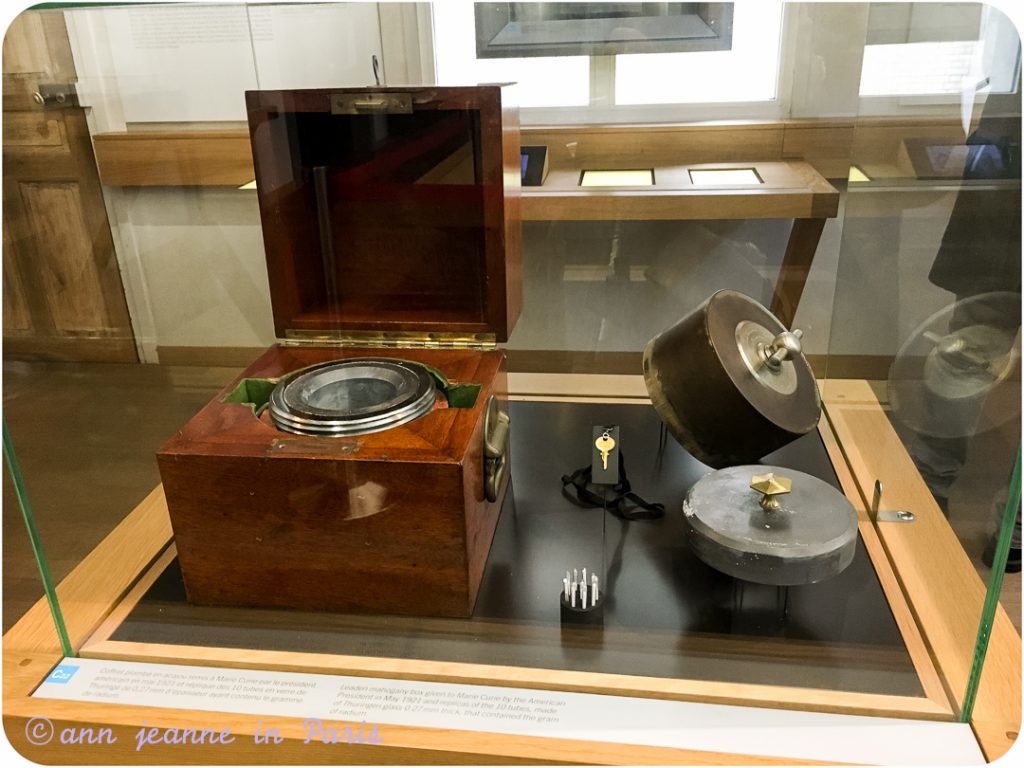 By the late 1920s her health was beginning to deteriorate. She died aged 66, on 4 july 1934 of aplastic anemia, a blood disease that is often caused by too much exposure to radiation. It is likely that the radioactivity she had been exposed to during her career caused the disease. On the photo : Marie Curie watching her garden from her laboratory (Rue Pierre et Marie Curie) 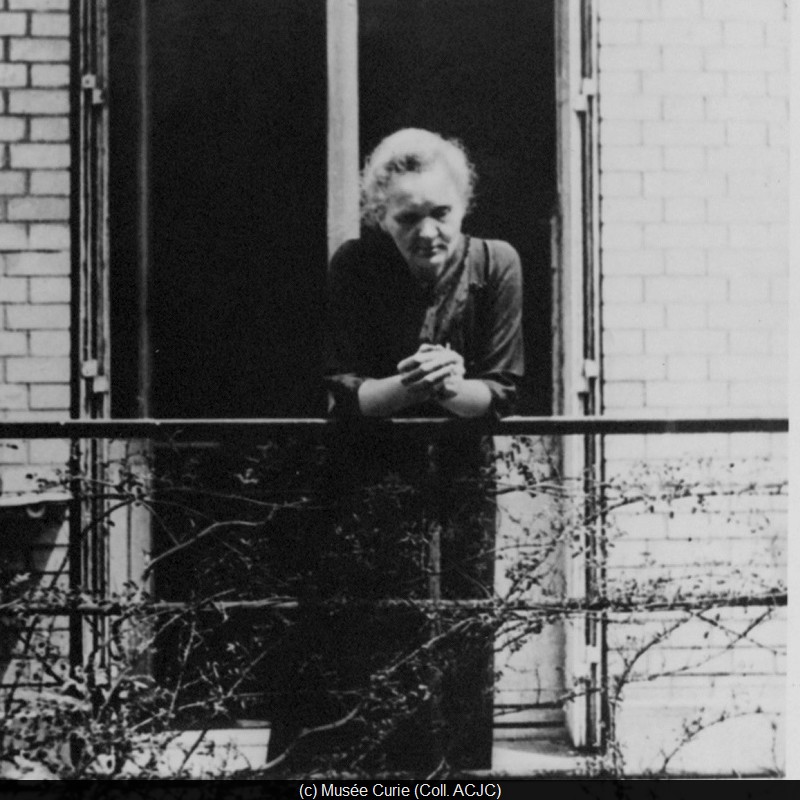 The Curies’ eldest daughter Irene was herself a scientist and winner of the Nobel Prize for Chemistry in 1935. She shared the honour with her husband Frederic Joliot for their work on their synthesis of new radioactive elements.

The two Nobel Laureates Marie Curie and her daughter Irène Joliot-Curie in the laboratory – 1925.

Eve Curie-Labouisse (1904-2007) is the youngest daughter of Pierre and Marie Curie. She was the only one in her family who did not choose a scientific career. She chose literary and artistic studies. After her mother’s death in 1834, she wrote a biography of Marie Curie, titled “Madame Curie.” It has been translated in 35 languages and became a worldwide bestseller. In 1954, she married an American diplomat who later became Executive Director of UNICED.  Eve Curie-Labouisse died in 2007 in New York at 102 years old. The Curie Museum in Paris was renovated in 2012 thanks to her legacy. 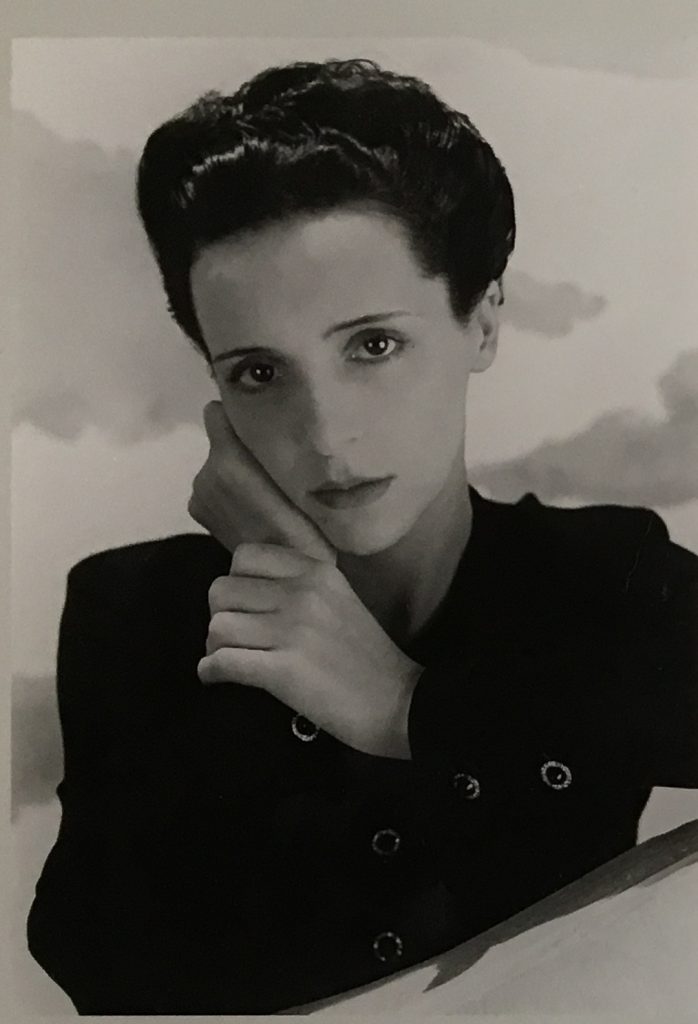 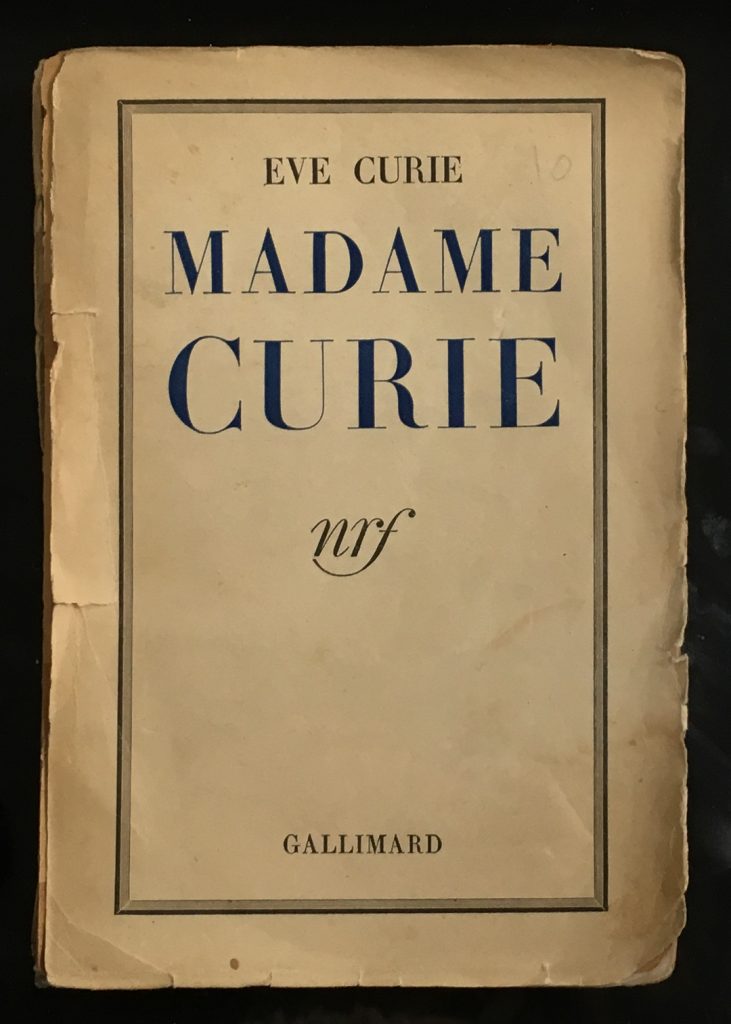 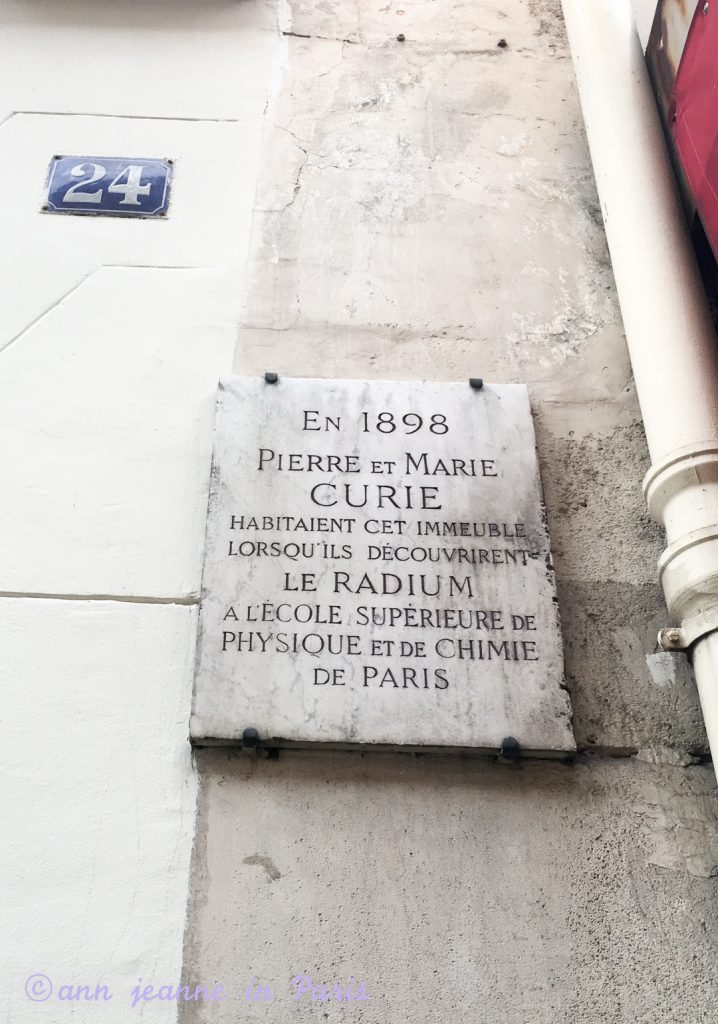 The Curie institute, which are important medical research centres. It’s where Pierre and

Marie Curie have been working. In 1914, Marie Curie became the Director of the laboratory of physics and chemistry located in the Radium’s Institute. 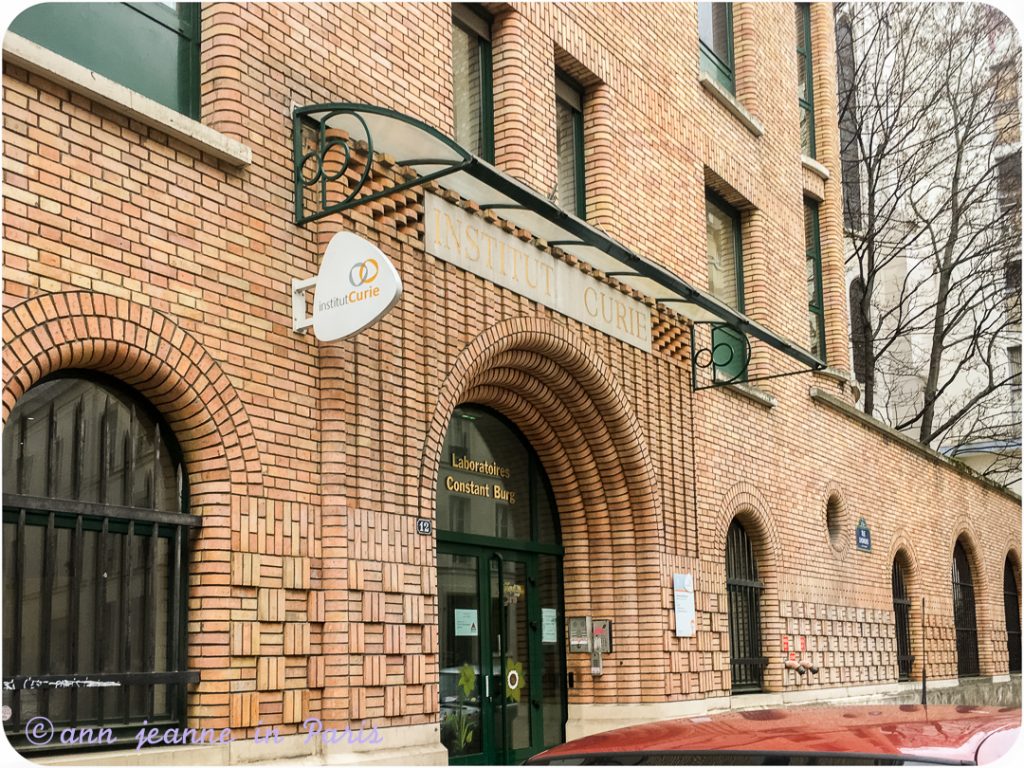 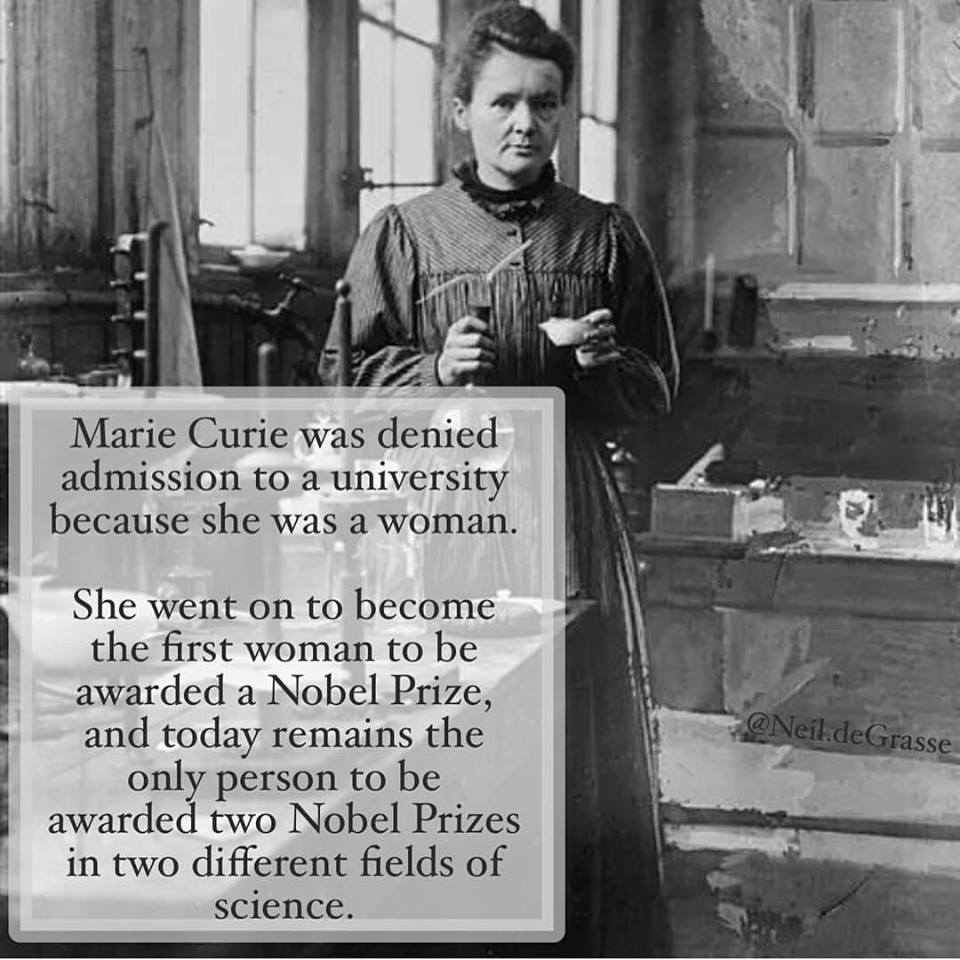 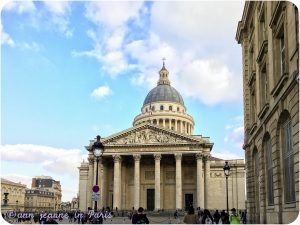 The Pantheon : The couple originally were buried in the Paris suburb of Sceaux (department 92) In 1995 their remains were moved in interred in the Pantheon in Paris alongside France’s greatest citizens (Victor Hugo, Voltaire, Rousseau…) Marie Curie was the first woman interred there based on her own merits.

The Pantheon: is a building in the Latin quarter in Paris which was originally built as a church.

“To the fatherland’s great men, in gratitude.” Prior to April 21, 1995, the famous inscription on the Pantheon’s ornamental front really had to be taken literally. Indeed, the crypt, where some of the nation’s most distinguished personalities lay buried, did not include a single woman, that is to say a woman honoured on her own merits. 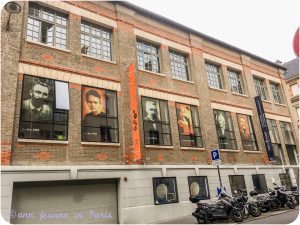 in Paris (along Rue Pierre Brossolette – Paris 5) marks the exact spot of the laboratory where Pierre Curie and Marie Curie discovered Radium and worked together from 1898 to 1902. The tablet was discovered in 1933.  EPCI : 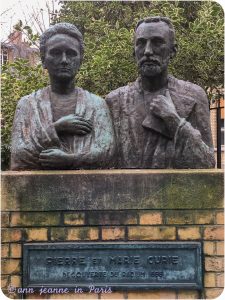 Marie Curie decided to establish a scientific institution worthy of Pierre’s memory. Helped by her scientist friends, she persuaded the French government and the private Pasteur Foundation to fund a Radium institute. Marie would head a radioactivity laboratory, and an eminent physician would lead its medical research laboratory.

It’s located in the ground floor of the Curie House of the Radium’s intitute built in 1914. The building sheltered the Curie laboratory devoted to the study of the radioactivity and directed by Marie Curie until her death in 1934 – 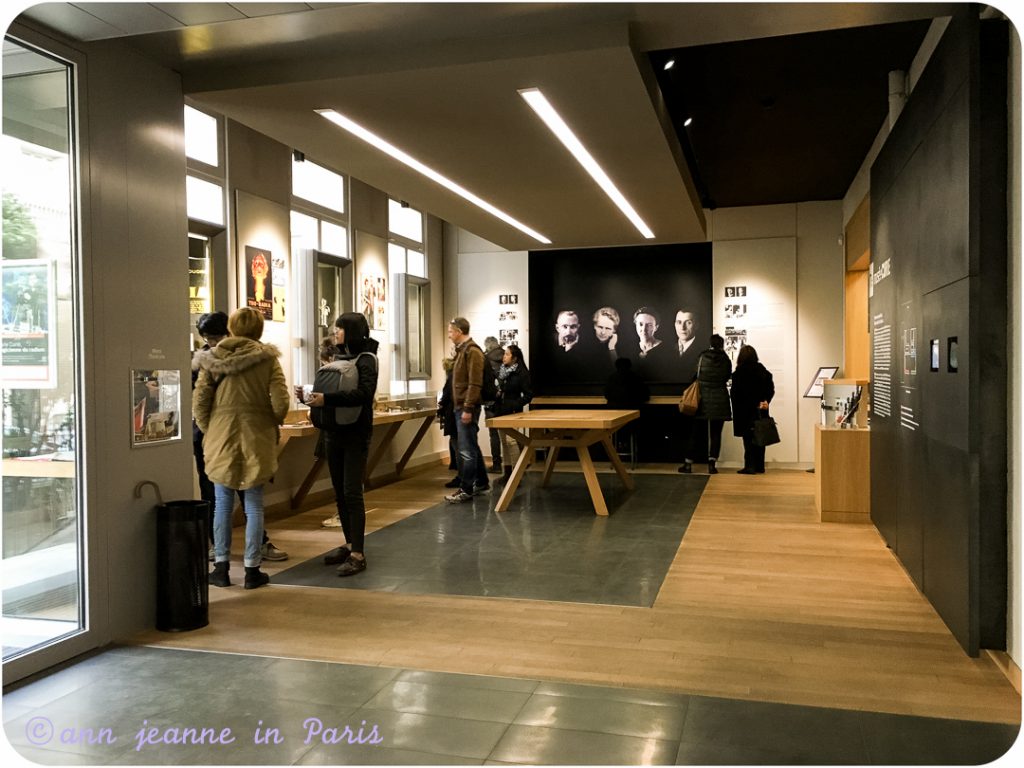 A metro stop called Pierre et Marie Curie : on the Line 7 of the Paris’ Metro but located in the suburb of Paris 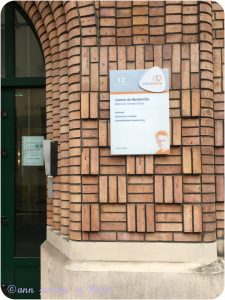 It’s one of the leading medical biological and biophysical research centres in the world. It’s a private non-profit foundation for research into cancer. The institute runs the Hospital Claudius Régaud, a cancer treatment hospital.

It was born from the will of a woman, Marie Curie and the importance of a cause, the fight against cancer. It has been created in 1909. Its main mission are the research , the diagnosis and the treatment of cancer.

Today, several educational and research institutions and medical centers bear the Curie name, including the Institute Curie and the Pierre and Marie Curie University both in Paris

2016 – Maria Sklodowska-Curie: French and Polish-language film directed by France’s Marie Noëlle.. A film shot in Paris, Brussels, Munich and Lodz, Krakow and Leba in Poland. It’s an intimate portrait of Marie Curie : « … a tale of her sorrows and joys, moments of triumph and defeat not only in the academic sphere but above all in her private and family life…. the so-far-unknown side of the protagonist.  Trailer: https://youtu.be/xEtesjGtchk

1997 – Les Palmes de M. Schutz. A French film about Pierre and Marie Curie. It was adapted from a play of the same name. In the film, Marie Curie was played by Isabelle Huppert https://movies.nytimes.com/movie/154828/Les-Palmes-de-M-Schutz/overview

A number of television documentaries have been made, including the BBC’s 2013 documentary The Genius of Marie Curie: The Woman Who Lit Up the World.

Books : A number of biographies are devoted to her.

In 2011 Lauren Redniss published Radioactive: Marie and Pierre Curie, a Tale of Love and Fallout 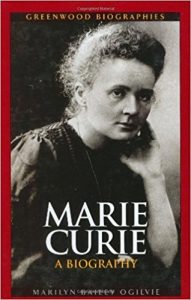 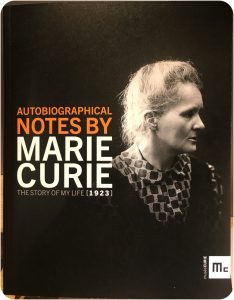 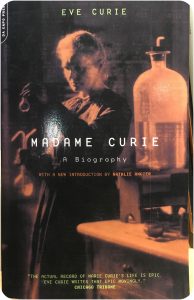 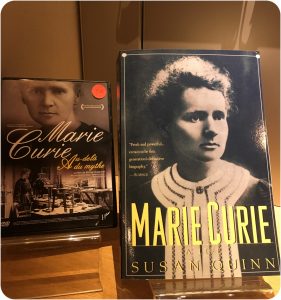 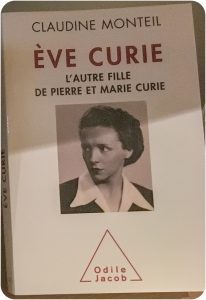 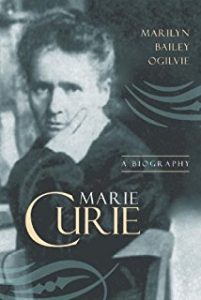 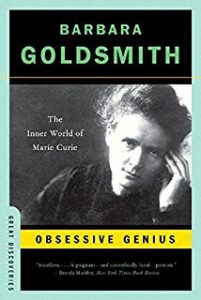 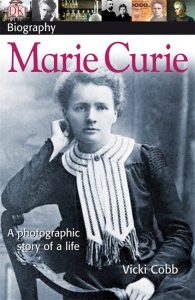 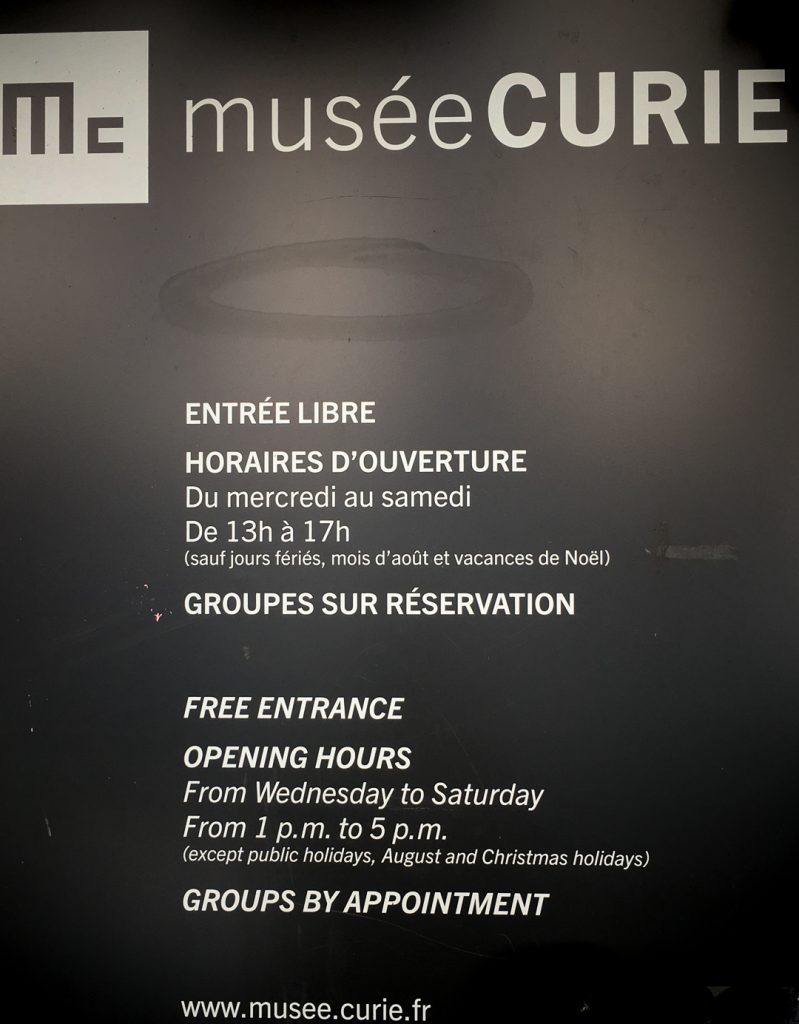 > Plan d’accès/How to find us 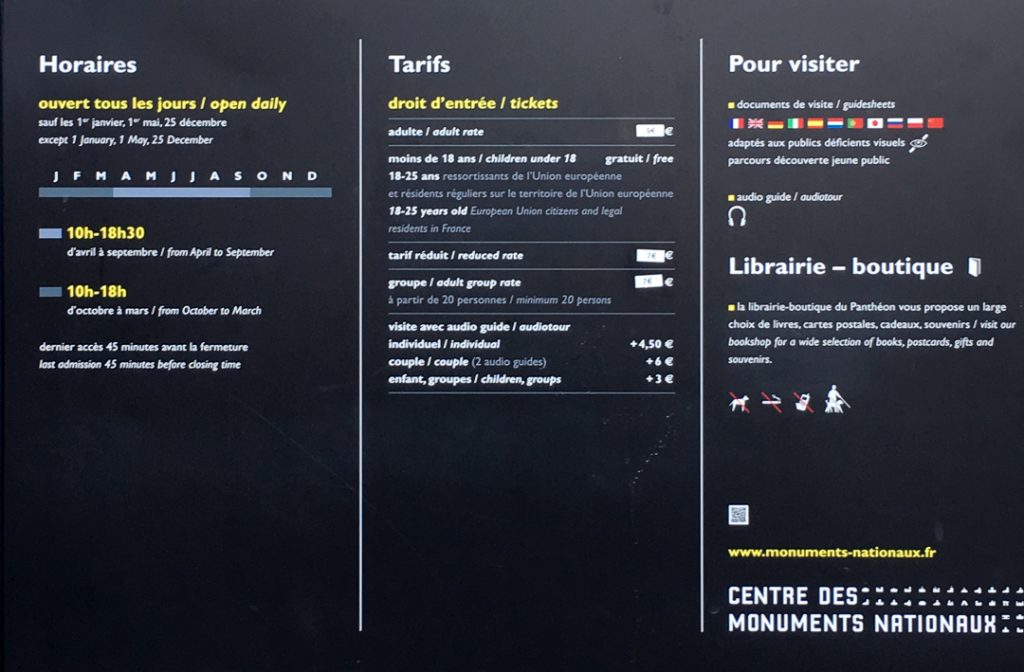